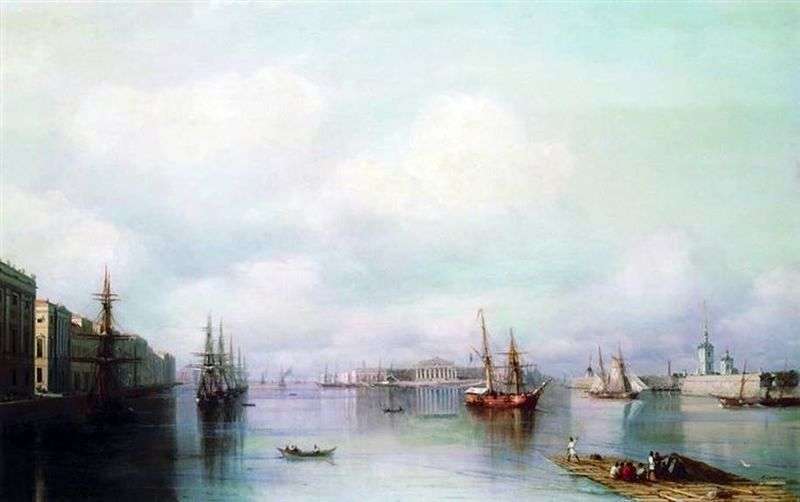 A little-known viewer of Ivan Aivazovsky’s painting “View of Petersburg” refers to the late period of the author’s work. Creativity Aivazovsky – seascape is connected directly with the sea. An exception are some of his other canvases. The painting “View of Petersburg” shows not the sea, but the Neva River, which occupies a larger space on the canvas. The river is restrained only by banks and built-up houses.

The overcast sky seems to merge with water, that one can not even accurately see this transition between them. The setting sun gently illuminates the sky reflected in the water, which tightens the clouds. The river and the sky are painted almost the same shades – turquoise and light gray.

The water surface dominates, as in other works of the master. On the shore you can see the outlines of the most famous buildings of St. Petersburg – the Stock Exchange, the Peter and Paul Cathedral, the magnificent Winter Palace. But the power of the river surpasses the grandeur of these buildings. In the picture you can see sailboats sailing and moored to the shore, small boats, raft, which is controlled by the helmsman. The pilot must have a good skill, judging by the number of ships.

The picture shows the main sights of St. Petersburg – beautiful monuments of architecture, ships on the pier and, of course, the Neva.

In St. Petersburg there was the formation of Aivazovsky as an artist, and thanks to this connection of the master with this beautiful city we can see on his canvases the nature, the grandeur, the beauty of this nature.