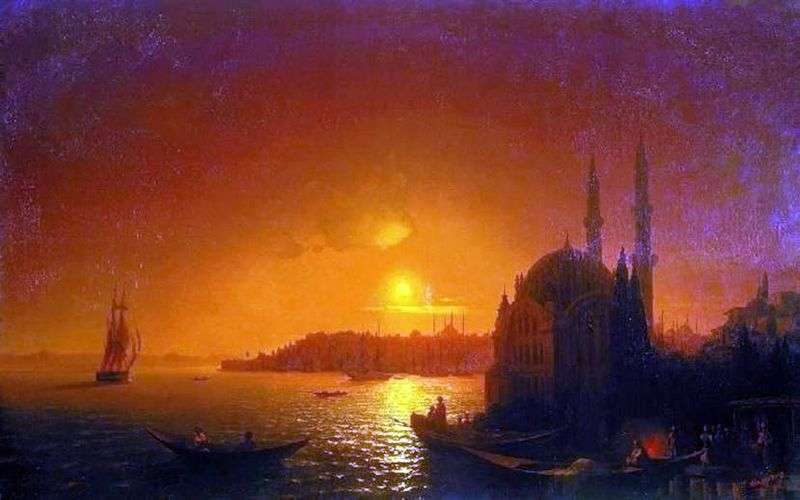 The picture of I. Aivazovsky appeared after several of his visits to Turkey. Impressions from this state were so vivid that he wanted to reflect them in his picture. The author several times depicted this city in his paintings, because he considered him the most beautiful, even more beautiful, than Venice. Hardly anyone of the artists can compare with him for the beauty of the image of the sea theme, the moonlight night.

In the painting “View of Constantinople in the moonlight,” we see that the city is depicted from the sea. The coastline frames it. On one side stands a mosque, and on the other one can see the palace silhouettes of this ancient city of the East and other all kinds of buildings. Moonlighting makes the sky golden, and illuminates not only buildings on the shore, but also the sea. Rare clouds are seen in the sky. On the surface of the water is clearly visible moon track, which looks very nice. The moon shines with a very unusual light. Usually it is depicted in shades of white and blue, and in this picture it has a red-orange hue. Rather, this can be seen at sunset.

The author repeatedly resorted to marine themes and this picture is his next masterpiece. Very unusual combination of colors that the artist uses. He shows the sky is not black, despite the fact that in the south it is characteristic. The author depicts it dark gray, because the moon brightens it. A ship and several boats are floating by the sea, which look very harmonious against the backdrop of distant shores. From them there is a small ripple on the sea. In general, the picture is depicted as if in a fog. The outlines of the buildings are a bit blurry, unclear.

The painting “The view of Constantinople in the moonlight” is very popular, because it is depicted in the haze of the mystery of the moonlight. It is stored in the State Russian Museum, which is located in St. Petersburg.