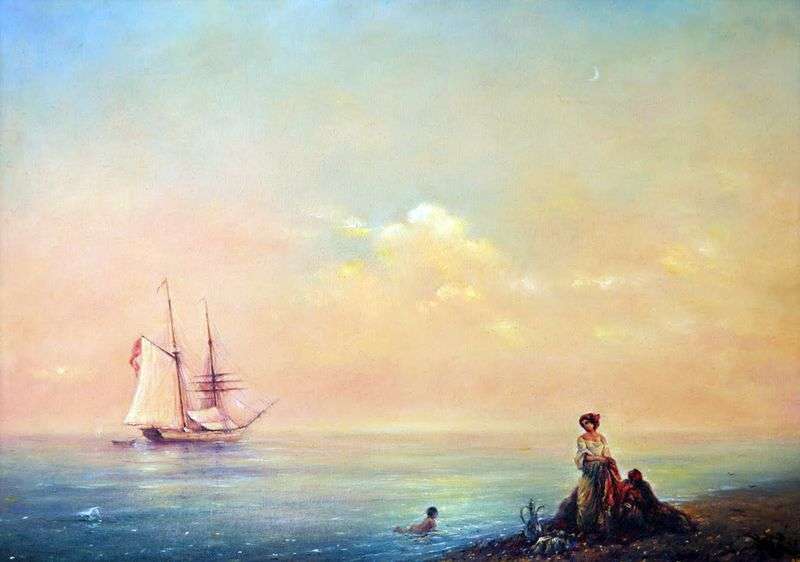 The work of Ivan Aivazovsky is closely connected with the sea element. Almost all of his canvases depict the sea. He also has earthly landscapes, but the artist is known in the world precisely as a landscape painter. Aivazovsky liked to portray the sea in different conditions – in a storm, in a storm, in complete calm, and also shipwreck, the death of people in the sea depths and people saved after the storm. And no one knows at what time the sea for a person can be safe.

The picture “Calm” is just a safe moment. The sea is in a state of total calm, and the family is resting on its shore. Dangers are not foretold, since a child is swimming in the sea near the shore. But in the sea always on the horizon can appear at least a boat. And on this canvas you can see a small brig. The sun has already gone beyond the horizon and in such a coolness it is very pleasant to swim, while the sea is still warm and calm.

The artist proportionally arranged everything on the canvas, but still the sky takes up a little more space. The sky, like the sea, is very calm. In it you can see both pink, and white, and blue shades, which are reflected in the sea surface.

Until now, it remains a mystery how Aivazovsky so realistically and naturally transmitted the colors of water. Upon closer examination of the picture, there is a feeling that the water is written with all the colors of the rainbow, and it is now rushing from the surface of the canvas. Aivazovsky, of course not the only seascape artist, but such geniuses as he is not yet. Many artists want to reach its level, but so far no one has succeeded.

In Evpatoria there is a museum in which only paintings of Aivazovsky are kept. And they left us a legacy of a considerable amount.