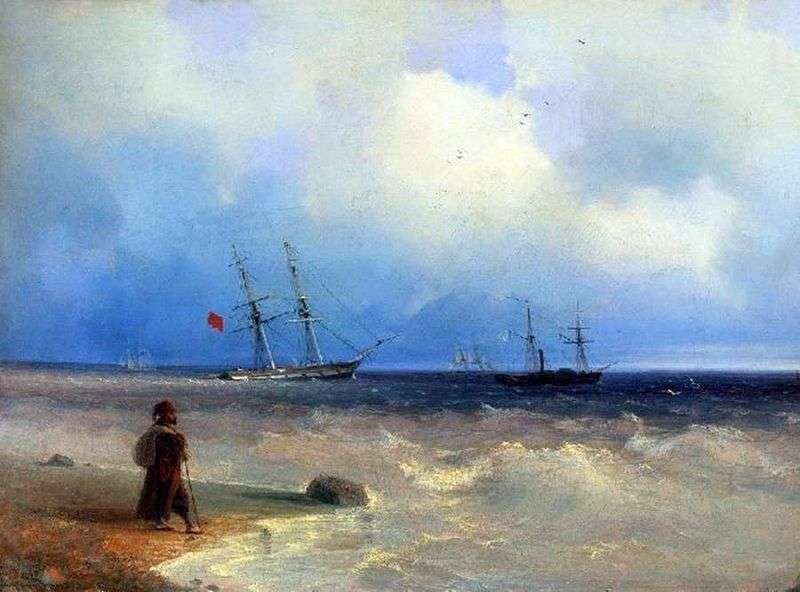 The painting “Seashore” is one of the first masterpieces of the great Master. It was written in 1840, when young Aivazovsky was sent to the Crimea for independent work. Still an inexperienced painter was able to transmit with extraordinary talent not only the view of the vast water expanse, but also the entire atmosphere of anxiety of the pre-threatened coast.

The sea is not yet formidable, it does not yet uplift water shafts, like mountain peaks, still light waves near the coast are deceptively playful and filled with sunlight. But the purple clouds are already too anxiously approaching, covering innocuous, white clouds, the seagulls are already floating too low and close to the shore, holding together, already a too black horizon line. And the ships are already at sea, so as not to break up on the coastal stones.

Among this oppressive anxiety, the figure of the wanderer stands out clearly. He does not hurry to hide from the approaching storm, he does not run home from a water hurricane, yes, it seems that he does not have a home. He looks into the distance. What is it that attracts him there? Perhaps there is his homeland, which is not visible, but it is there, and the traveler knows it for sure. Or maybe, on the contrary, it attracts unknown, unknown lands, where it is always warm, where people are kind and friendly, where there are no beggars and hungry?

The life of the wanderer, most likely, was also stormy, disturbing, not calm, like this sea. Probably, that’s why it is not afraid of a stormy sky and a gloomy watery width. She calls him, attracts him, beckons him.

You can guess about this for dozens and hundreds of years, as people do, standing in the immortal masterpieces of Aivazovsky.