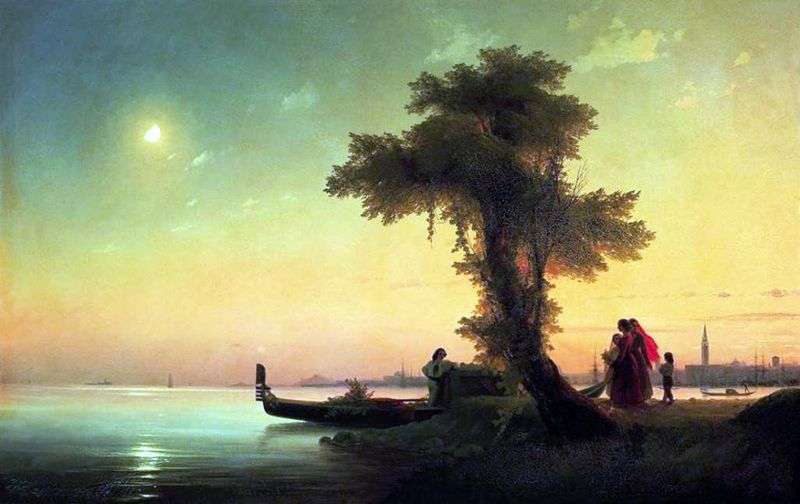 In 1840 Aivazovsky, among other boarders of the Academy of Arts, went to Rome to continue his education and improvement in landscape painting. In Italy he went to the already established master who absorbed all the best traditions of Russian art. The spent years abroad are marked by tireless work. He acquainted with classical art in the museums of Rome, Venice, Florence, Naples, visits Germany, Switzerland, Holland, France, England, Spain, Portugal.

The artist worked in Italy with great enthusiasm and created here about fifty large paintings. Exhibited in Naples and Rome, they caused a real stir and made the young painter famous. Critics wrote that no one had previously depicted light, air and water so vividly and reliably. Particularly admired were his seascapes: View of the Venetian lagoon, the Bay of Naples, the Amalfi Coast, Chaos. World creation. , The Gulf of Naples in the moonlight, the Coast. Calm. and many others. This success was received at home as a well-deserved tribute to the talent and skill of the artist.

“Artistic thinking of the master is decorative, it is due to his childhood, his blood, his origin.” Decorative does not interfere, but promotes Aivazovsky in his precise emotional characteristics depicted. “The perfection of the result is achieved by the virtuosity of the most extraordinary tonal nuances. Here he has no equal, that’s why he was compared with Paganini Aivazovsky – maestro of tone. The canons of the European school, which he has mastered, are superimposed on his natural, purely national decorative flair.

This unity of the two beginnings allows the artist to achieve both a convincing saturation of the light-air atmosphere, and a melodious color harmony. Perhaps, it is in the uniqueness of such a merger that the sorcerous attractiveness of his paintings is hidden. “