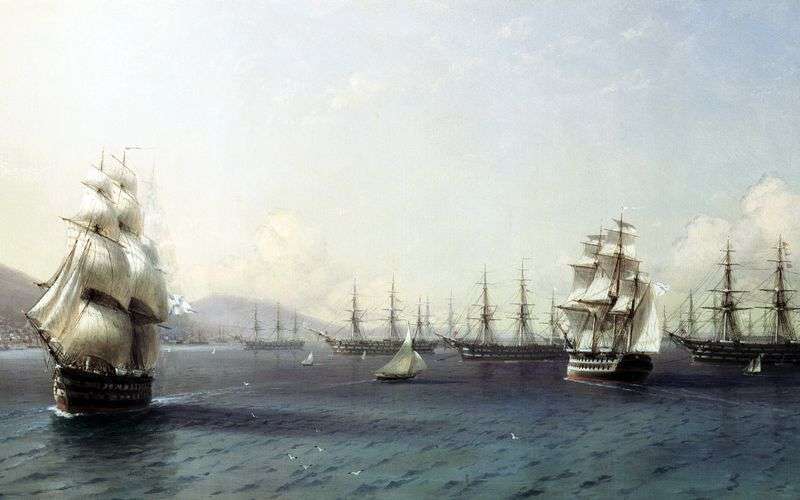 “The Black Sea Fleet in Feodosia” has a historical character. It shows the events of 1846. The artist this year celebrated the decade of his work. In order to congratulate the great artist on the ship “Twelve Apostles” came his friends. At the head of this naval flotilla was Aivazovsky’s closest friend, Admiral VA Kornilov.

In this famous painting, the artist painted a clear light blue sky, a dark, calm transparent water surface through which a clear sandy bottom can be seen, and ships with beautiful white sails. A lot of ships that make up a huge fleet are rushing to the shore.

The quay of Theodosia is covered with a light fog, which will soon dissipate. The solemnity and grandeur of this painting amazes the viewer’s eyes. Tranquility and silence fill this great creation. This is a warm summer day, when there is neither cloud nor cloud in the sky, and light waves are created only by the movement of ships.

In the background, you can see the majestic Crimean mountains and city buildings. The fleet on the shore is met by ordinary people who came to see the pride of the Russian Empire. The artist himself at that time was a member of the Navy’s headquarters, and everyone he worked with, and the bosses and colleagues were proud that their team had such a gifted person.

The tranquility that reigns in this picture conveys the power, the serenity of the Russian fleet and its constant readiness to fight and defend the homeland. Unharmed, in full force, he returns to his native bay.