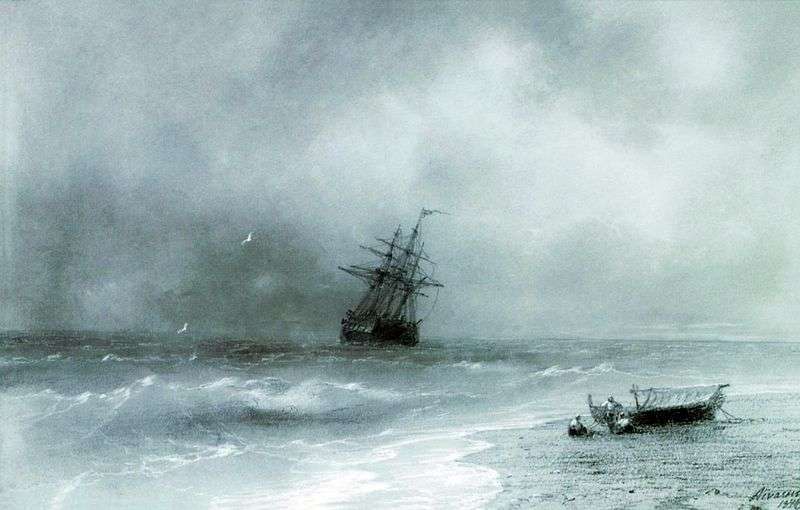 One of the best painters-seascapes of all time – Ivan Konstantinovich Aivazovsky in 1844 painted the painting “Stormy Sea.” All his works are amazing and amazing with their realism and naturalness, although they are not written from nature, but in the artist’s studio.

The master believed that changing the movement of each element, whether wind, water or lightning is impossible to capture at once with colors, so the real artist first remembers everything seen, and then transfers it to the canvas. The artist possessed photographic memory, thanks to which he wrote his works in the studio.

So the picture “stormy sea” conveys the rumblings of violent waves in inclement weather, created also with the help of the artist’s beautiful imagination. In the painting, Aivazovsky portrayed a rickety ship, which can no longer resist the onslaught of the sea. The sailors are already preparing a lifeboat to be able to save people on the ship from a sudden sea storm. Aivazovsky liked to depict on his canvases the struggle of man with the elements. In his realistic paintings, ships do not rarely die in the sea abyss.

Coloring paintings “stormy sea” is very cold, filled with shades of gray, white, light blue and black. The sky is covered with thunderclouds, the motion of which the trowels conveyed by the artist. The raging sea, with powerful, beating waves, gives the impression that there will never be a warm, clear day. The picture evokes a sense of anxiety and fear, an understanding of the helplessness of small people in front of a ruthless, huge sea element.