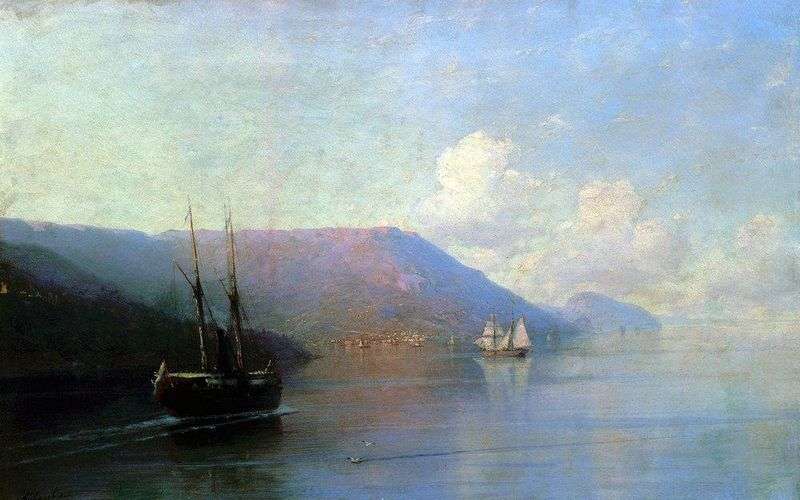 Description of Ivan Aivazovsky’s painting “The Crimean coast” Ivan Aivazovsky is a great seascape painter! He brilliantly conveyed the beauty of the watery surface that it seems that the picture is really water, and not the color layer that conveys this effect. How he managed to achieve such perfection of the image remains for us a secret.

The artist lived long enough and until the last days created his magnificent canvases. And now the viewer can admire his genius and admire his amazing seascapes, sea activities and battle scenes on the sea.

In the picture “Crimean coast” before the gaze of the viewer appears a shore hidden in a misty haze. But whether it was early morning or vice versa the sun will soon go beyond the horizon remains unclear. Only at this time the sea and the sky so merge with each other. It’s so delicious that you can only tell them by ripples on the water. This is a mirror marine canvas, where it is difficult to distinguish the sea kingdom from the heavenly. Consciously the artist depicts the shore in a hazy haze, so that the sea is the main one. Ships enter the bay at the shore, as well as “heavenly ships” on the horizon – clouds plow the heavenly ocean.

The clouds foreshadow a storm and a storm. And only then it becomes clear that the ships are rescued from large waves in the bay, which serves as a safe haven for them. Collectors are hunted behind the canvases of Aivazovsky, this recognized genius of sea landscapes. And it does not matter to them what the size of the master’s work is and how much it costs. But, despite this, almost all of the author’s works are in museums in Russia, with the exception of several works in world museums, such as the artist’s house museum in Evpatoria.