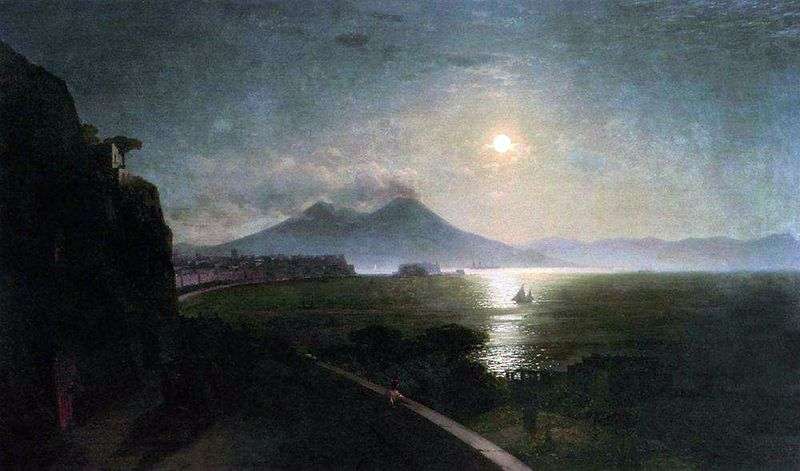 Ivan Aivazovsky had an extraordinary talent from nature. The environment in which he was brought up and grew up, as well as certain circumstances, contributed to the rapid development of the abilities of the future painter.

Aivazovsky lived on the Black Sea, which inspired the artist to create bright images. In his works the sea is filled with joy, then full of extraordinary radiance, sometimes gloomy. Less often it is calm. Most of all, the artist liked to depict raging waves that hit the rocks with a powerful blow, and the ships were like fragile shells that had become nothing but toys for this irresistible element.

Aivazovsky quickly worked and therefore the picture of “Vesuvius” is an etude painting created by the master for half an hour. The canvas shows a wide panorama of the bay in Naples. In the background, you can see the beach going down to the sea and Vesuvius volcano, which is slightly smoking. It seems that the haze, simultaneously gloomy and transparent envelops everything around. The sun at sunset illuminates the horizon with a pinkish-gold light. The sea, painted in blue shades, creates the impression of fairy-tale.

The main detail of the landscape is the volcano Vesuvius, which is the only active volcano in Europe.

The impression of the picture remains ambiguous. There are a lot of gloomy shades on the canvas, which creates a feeling of despair. But at the same time, the grandeur and grandeur of this work can leave a bright impression on the viewer. Aivazovsky is a true master of his craft. From the picture, one can hear and feel the roar of noisy waves and the rushing of gusts of wind.

The nature of Italy is depicted so magnificently that one feels the attitude of the artist himself to what he has seen. And he invested all his emotions in his paintings.