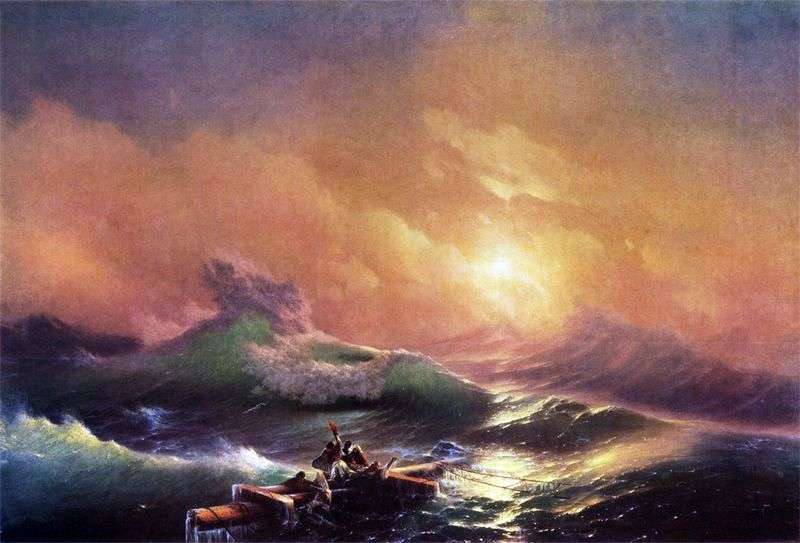 Painting I. Aivazovsky “The Ninth Wave” – one of the most famous of his paintings.

I see that the artist painted a raging ocean on it. The wave is rapidly moving to the wreckage of the ship, which crashed. On this wreck there are still people who survived this tragedy. They lead an unequal struggle with the elements. But this struggle is beyond their power, because, as soon as one wave recedes, another approaches. People are very frightened, they have no strength left.

The rays of the rising sun make their way, they give the water a yellowish shade. The sky at this moment is also depicted very richly, which is typical for thunderclouds. Waves are depicted in the picture in different colors. The artist used a varied palette. Here, and blue, and purple, and the color of the sea wave. All the sea shades, he displayed simultaneously in one of his work, which gives it a greater saturation of colors.

I think that I. Aivazovsky wanted to show this work all the strength of the sea element that a person or even a few people can not cope with its onslaught. Their struggle will go to the last, every second they will perform literally a feat, but they can not stand this unequal battle with the raging nature. Sea waves sweep everything in its path, sparing no one and nothing. There are no obstacles for the elements. But the faith of people does not leave them for a minute, despite the fact that help will not come.

I would like to note that Aivazovsky is a recognized master of the depiction of seascapes. This picture, as well as many others, is permeated with strong emotions. In addition, the author shows himself and as a person who wants to understand people, their thoughts, aspirations. I think, I. Aivazovsky shows that the heroism of people often manifests itself in the most unpredictable situations. He managed to show in one work not only an amazing natural phenomenon, but also the feelings that people who have got into such conditions feel.