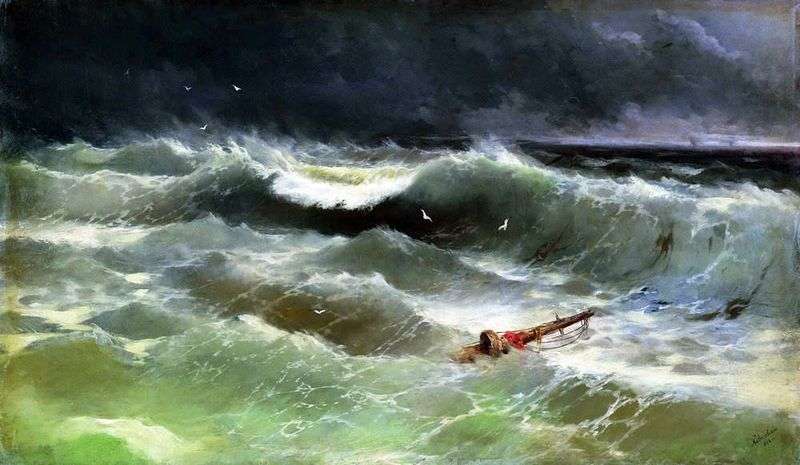 The main theme of the paintings of the great Russian painter sea painter Ivan Aivazovsky is the sea in all its states. The artist seems to be pouring into this element and conveying with the utmost verisimilitude the full power of this great power. He seems to know some secret, thanks to which he skillfully writes his seascapes. The sea in its canvases is calm, as if it had calmed down before the storm, then raging, crushing ships, which like toys are in the grip of the brutal game of the sea element in life.

In the painting “The Tempest”, written in 1886, it is shown a troubled sea. High waves roll one on another, crushing everything in its path. And now you can see the ship that crashed. Battling with the irresistible force of the mightiest waves, he could not resist, and only the mast still wavered on the water.

It is terrible to imagine how many victims this tragedy carried into the sea depths. White gulls, like flashing bright sparks, swirl over the place of tragedy in search of prey. The dark sky, covered with heavy clouds, only aggravates this dramatic plot. But on the right side you can see enlightenment, then the storm will soon calm down, the clouds will scatter, and the sea will again become calm. The storm seemed to fulfill its cruel plan. This work is magnificent, but at the same time filled with the horror of the moment.

The picture is written so realistically that it seems that the waves are moving, and their strength will soon fall upon you. Looking at the picture, as if you smell the sea water, and you hear the cries of seagulls, interrupted by gusts of wind. This masterpiece once again makes us realize that man is powerless before the great power of nature.