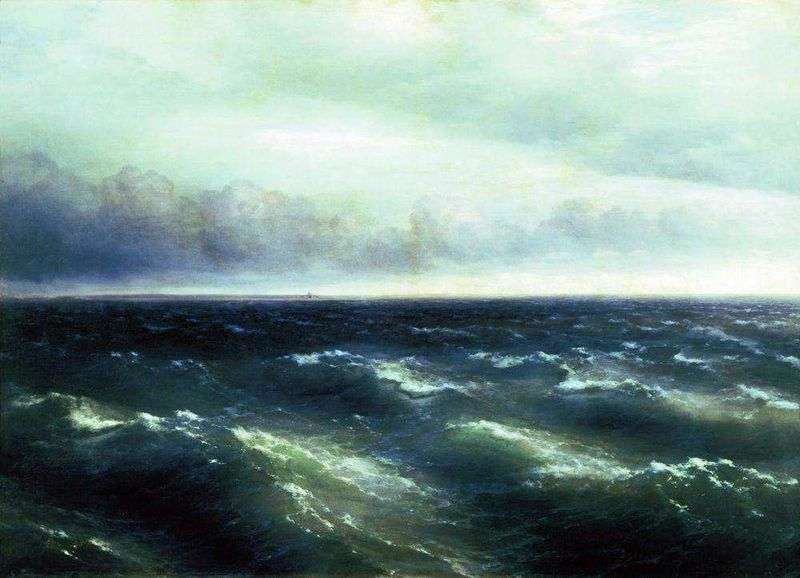 The painting by IK Aivazovsky “Black Sea” has some mysterious attraction. It forces the viewer not only to watch the unruly water element, but also to feel all the riot of her character.

The first thing that catches your eye, a clear boundary dividing the two eternal confrontations – water and air. Their struggle is marked in everything, and first of all it is noticeable on the tones that the artist uses. The green-gray, sometimes horrificly black sea, the personification of something stormy and severe, is contrasted with the grayish-blue sky, a symbol of tranquility, somewhere far away becoming purely white. And the same pure white haze on the horizon as if hints that the neighborhood of the two struggling elements is impossible.

Of course, the main image of the canvas – this is an endless sea, which IK Aivazovsky captured at the moment of just a storm. It is like a living entity with a troubled soul. You can see how the wind intensifies, catching the formidable waves, ready to swallow any sea traveler. It is impossible to understand where the birth of those little “lambs” takes place, which then become crests of terrible waves. Such a feeling that we were alone with a formidable natural force, which as if carries away with them into distant expanses or takes in a bottomless abyss.

Although somewhere in the distance a dilapidated boat with its owner was lost. The presence of such a tiny detail, indicating the presence of a living being, speaks of how small and insignificant a person is compared to the terrible element born of nature.

It’s hard not to feel how strong Aivazovsky’s artistic talent is. He managed not only to portray the restless state of the sea landscape, but also to show his inner frightening power. This makes anyone admire the canvas “Black Sea”.