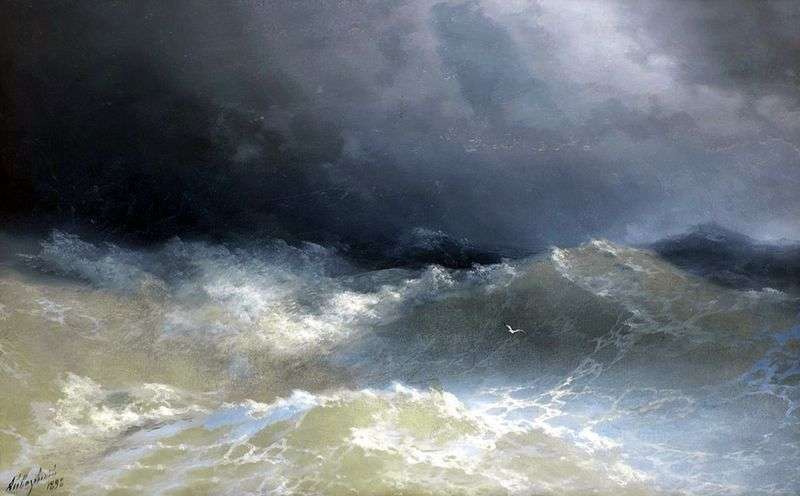 IK Aivazovsky is one of my favorite artists. All his life he devoted to creating paintings with marine themes. He masterfully portrayed the sea element, no one else before or after him did it better. “The sea is my life,” said Aivazovsky, and really passionately, before deification, he bowed to the object of his love. The painting “Among the Waves” was written in 1898, at the age of 81 of the artist’s life.

In this picture, the author skillfully portrayed an angry sea element. We see a storm on the canvas, a raging sea, a stormy sky, strong waves, bubbling and boiling, ready to absorb all life. It is noteworthy that the author depicts only the sea, merged with a stormy sky. There are no wreckage of ships, masts, dying seafarers, who are trying to fight the elements, although all this is present in other paintings of the author. Aivazovsky depicts a very low horizon, the stormy sky and the raging sea element are almost not divided. This canvas causes me a storm of emotions, there is excitement, anxiety, fear, but at the same time and admiration for the greatness of the sea element. Only an ingenious master could create such a simple composition, but causing such a complex palette of emotions.

When I look at this amazing picture, it seems to me, I hear the rumbling of waves and frightening peals of thunder. The picturesque palette of colors consists of numerous shades of gray, green, blue. Surprisingly colorful gamma, while extremely mean in color, almost monochrome. Also we see white lacy foam of waves, which adds to the picture of the solemn color.

Compositional and subjective picture is very simple, but very deep in perception. We see here leaden clouds, a storm wind, evil waves, but you can see a wide beam of light in the corner of the picture, as a hope for future bright changes. The storm will soon abate, and we will again see a calm sea. The most amazing thing is that the sea in the pictures of IK Aivazovsky is always alive. In this picture there are no people or animals, the protagonist of the picture, like most of the artist’s paintings, is the sea.

I would like to compare the picture “Among the waves” with another creation of this great master, which is called “Wave”. On the one hand, these pictures are very similar, on both of them we see a storm, a boiling and raging sea, a low horizon line that unites the sea element with an angry sky.

The paintings are similar in color. But at the same time the picture “Wave” is gloomy, it depicts the destructive element, which absorbs the ship and all living things on its board, bears death. And the picture “Among the waves” is surprisingly solemn, there are many light tones in it, here we see the greatness of the sea element, and not death and destruction.

The painting “Among the waves” is rightly considered the pinnacle of the artist’s work and a masterpiece of world painting. For the author, it also had a special significance, because he and bequeathed it to his native city – Theodosia, where it is kept until now.