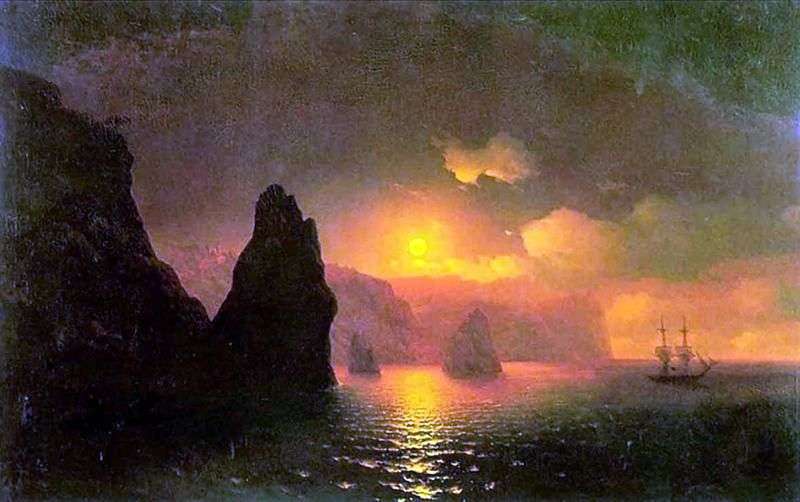 The artist Aivazovsky is known throughout the world for many pictures with marine themes. He gave preference to writing paintings on the Black Sea. One of his most famous works is the painting “St. George’s Monastery,” which he wrote at the very beginning of his work. At that time, Aivazovsky was very young, so in many early works you can trace the romantic notes of the mood of the artist.

I think that Aivazovsky first saw Cape Fiolient, which is depicted in this picture, at night. The landscape that opened before his eyes so inspired the artist that the painting “St. George’s Monastery”, like many subsequent paintings of the author, is an image of the sea in the light of the moon.

When I looked at the picture for the first time, I admired how much attention the artist paid to every sea wave, lovingly adorning it with glints of moonlight. All together they represent a moonlit path that spreads over the dark sea water.

Also in the foreground you can see formidable black rocks, which, like guards, protect the sea peace. However, if you look at the rocks more closely, you can see how they shine from the incoming waves. Hence, the fact that the sea is calm – there can be no question. The dark clouds, threatening to hang over Cape Fiolient, told me the same thing. When I combined all these natural phenomena, I had the impression that Aivazovsky drew the night sea, in anticipation of the storm. Waves are pumping a couple of boats, which probably stopped for the night near this cape, but did not expect that during the night they overtook the bad weather.

For me, the painting “St. George’s Monastery” has a slightly disturbing character. Perhaps, in the soul of the young artist, at the time of writing this picture, in addition to inspiration from the seen landscape, there was also a tinge of alarm. However, this is very characteristic of young people, and even more so of creative individuals.