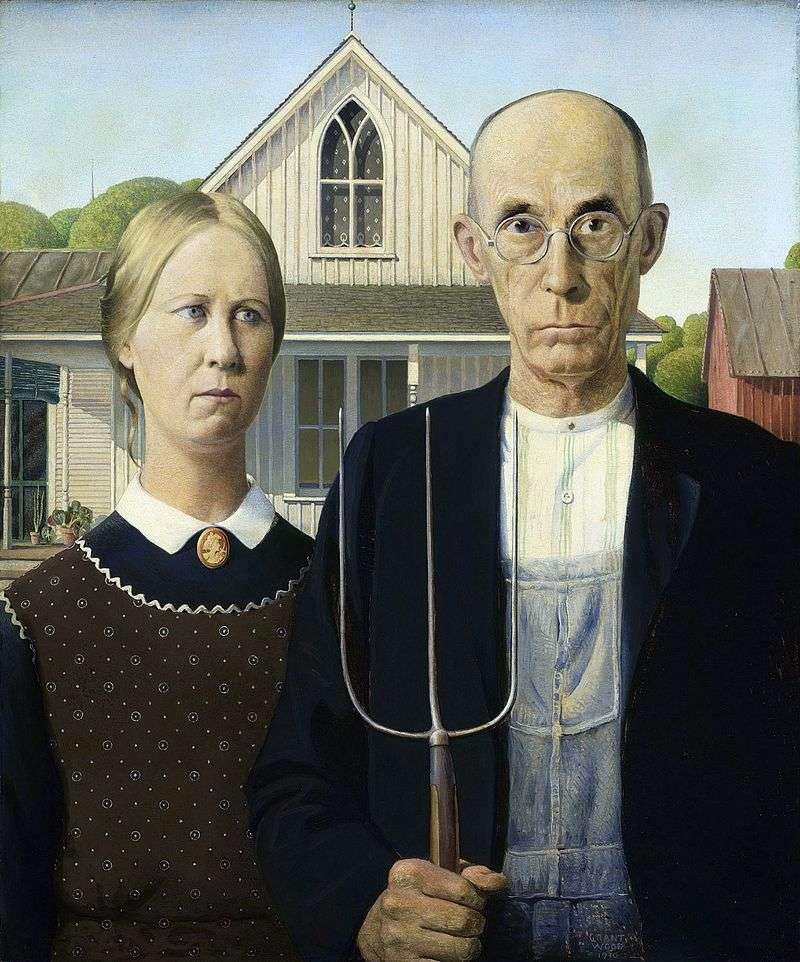 “American Gothic” – one of the most recognizable images in American art of the XX century, the most famous art memorial of the XX and XXI centuries.

The picture with the grim father and daughter is overflowing with details that indicate the severity, puritanism and retrograde of the people depicted. Angry faces, pitchfork right in the middle of the picture, old-fashioned clothing even by the standards of 1930, exposed elbow, seams on the farmer’s clothes, repeating the shape of the pitchfork, and therefore a threat that is addressed to all who will encroach. All these details can be seen endlessly and shriveled from a mess.

In 1930, in the city of Eldon, Iowa, Grant Wood noticed a small white carpentry-style house. He wanted to portray this house and people who in his opinion could live in it.

Artist’s sister Nan served as a model for the farmer’s daughter, and Byron McKiby, the dentist of the artist from Cedar Rapids in Iowa, became the model for the farmer himself. Wood wrote the house and the people separately, the scene, as we see it in the picture, was never really there.

Wood presented “American Gothic” at the competition at the Chicago Institute of Arts. Judges rated it as a “humorous valentine”, but the curator of the museum persuaded them to give the author a prize of 300 dollars and persuaded the Institute of Arts to buy a painting where it remains to this day. Soon the picture was printed in the newspapers of Chicago, New York, Boston, Kansas City and Indianapolis. However, after the publication in the newspaper of the city of Cedar Rapids, a negative reaction followed.

The people of Iowa were angry at the way the artist portrayed them. One farmer even threatened to bite off Voodoo’s ear. Grant Wood justified himself that he wanted to make a caricature of the inhabitants of Iowa, but a collective portrait of Americans. Sister Wood, insulted that in the picture she can be mistaken for a man’s wife twice her age, began to assert that “American Gothic” depicts a father and daughter, but this moment Wood himself did not comment.

Critics such as Gertrude Stein and Christopher Morley believed that the picture was a satire on the rural life of small American townships. However, during the Great Depression, the attitude towards the picture changed. It began to be seen as an image of the unshakable spirit of American pioneers.

According to the number of copies, parodies and allusions in popular culture, “American Gothic” stands along with such masterpieces as “Mona Lisa” by Leonardo da Vinci and “Scream” by Edvard Munch.