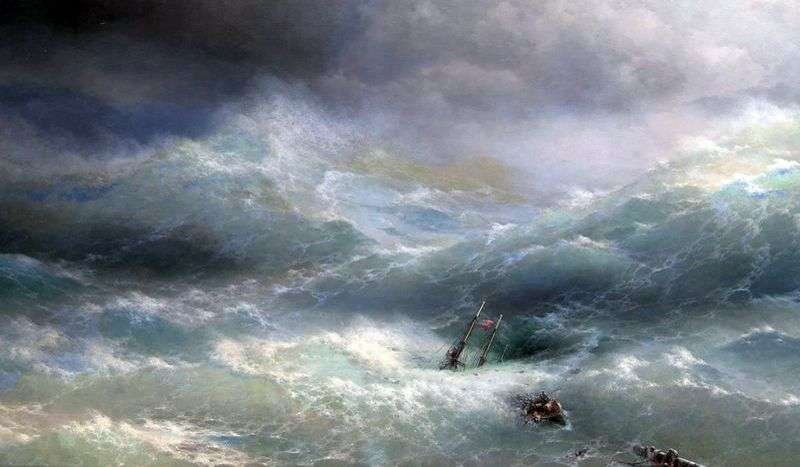 At the end of his life Aivazovsky was absorbed in the idea of creating a synthetic image of the sea element. In the last decade he has written a number of huge pictures depicting a stormy sea: “Rock Collapse”, Wave, “Storm on the Sea of Azov”, “From Calm down to the Hurricane” and others.

Simultaneously with these huge paintings, Aivazovsky wrote a number of works that were close to them according to the plan, but they were distinguished by a new colorful scale, extremely mean in color, almost monochrome. Composition and plot these pictures are very simple. They depict a stormy surf on a winter windy day. On the sandy shore a wave has just broken. Boiling masses of water, covered with foam, quickly escape into the sea, taking with them shreds of mud, sand and pebbles. To meet them rises the next wave, which is the center of the composition of the picture.

To enhance the impression of the growing movement, Aivazovsky takes a very low horizon, which is almost touched by the crest of a large approaching wave. Far from the shore in the roadstead are depicted ships with harnessed sails anchored. Above the sea hung a heavy leaden sky in thunderclouds. The generality of the content of the pictures of this cycle is obvious. All of them in essence are variants of the same story, differing only in details. This significant series of paintings is united not only by the generality of the plot, but also by the color structure, a characteristic combination of a leaden-gray sky with an olive-ocher color of water, slightly touched by the horizon with greenish-blue glazes.

Such a simple and at the same time very expressive colorful scale, the absence of any bright external effects, clear composition create a deeply truthful image of the sea surf on a stormy winter day. Aivazovsky wrote quite a few paintings in gray color. Some were small; they are written for one or two hours and are marked by the charm of the inspired improvisations of a great artist. A new cycle of paintings possessed no less virtues than his “blue marinas”.