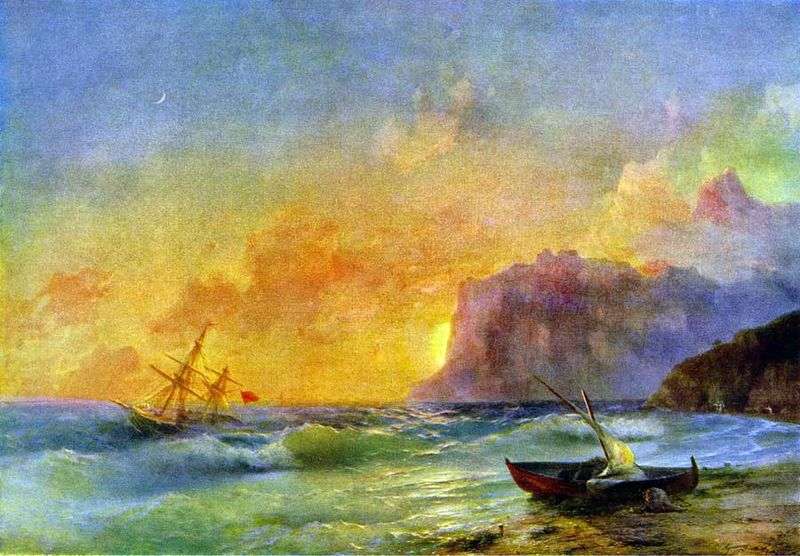 The painting “The Sea, Koktebel Bay” was written by Ivan Konstantinovich Aivazovsky in 1817. In the foreground I see a small beach, on which foaming waves come. On the beach lies a fishing boat, riveted to the side of the exciting sea.

It can be seen that the waves were hard on her. The sail was completely lost in a shapeless crop. The boat was buried in a large stone. It seems that the turbulent turbulent waves are about to catch it and again take it to the sea far distances, beyond the horizon line, which is clearly visible against the background of thunderclouds blossoming with the setting sun into fiery colors. It creates a very believable impression that a huge fire is raging beyond the horizon line. The clouds in the foreground look like clouds of thick smoke.

All this formidable phenomenon hangs over a small ship, which, apparently, drowns, overwhelmed by waves. There are no sails on his mast. Perhaps they were torn by gusts of wind. And the feeling is created, as if the sea pulls the boat, like a monstrous creature. No less formidable than the sky and the sea, the rocks appear in the picture, breaking straight into the sea abyss and resembling a fairy creature that emerged from a dense forest and dipped its muzzle into the water.

Looking at this picture, I feel overwhelmed with a feeling of foreboding anticipation of an impending storm, from which there will be no salvation either on the sea or on the shore. And only bright sunlight, like a ray of hope, makes its way through the bad weather. This picture reflects the artist’s love for nature, to the sea, which is able to admire all manifestations of natural power.