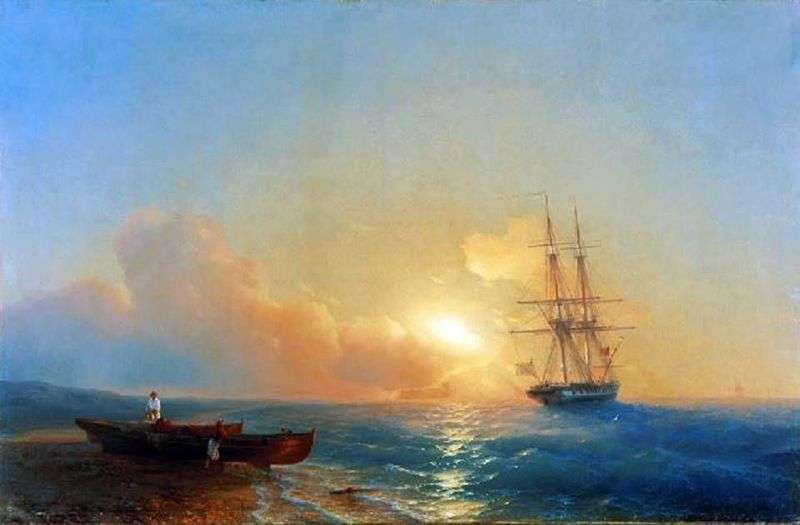 “The sea is my life,” the artist said. He had the ability to convey the movement and breath of the sea. Aivazovsky from the childhood loved the sea and managed to create a truthful and poetic image of an unlimited element, the romantic perception of which remained true always. Master differed in unusual picturesque thinking. On the canvas the artist creates bright, amazing combinations of his beautiful decorative sound. You perceive such works as a symphony of colors, as a song to beauty. “I live another three hundred years,” said the artist, “I would always find something new in the sea.”

Often in the paintings of Aivazovsky you can see people admiring the majestic beauty of nature. The artist sees in man an integral part of the universe. His “fictional” romantic heroes in their own self-portraits. The artist opened his method of imaging from memory, even without sketches, confining himself only to sketchy pencil sketches. Justifying this method, the artist said: “Movements of living elements are elusive for the brush: to write lightning, a gust of wind, a splash of the wave is unthinkable from nature.” sunk emerald game of the Black Sea surf. Subsequently, no matter how many seas he wrote, everything turned out to be transparent green water with lilac lace of foam peculiar to his native Euxine Pontus.

The most vivid impressions were connected with the sea; probably therefore he dedicated all his creativity to the image of the sea. With the same force could convey the brilliance of the sunlight sparkling in the water, the transparency of the sea depth and the white foam of the waves. The works of Aivazovsky stood out among the works of contemporary painters of his coloring qualities. In the 1840s during the exhibition in Berlin, the reviewer of the local newspaper explained the increased sounding of color in the works of the Russian artist in that he was deaf and dumb, and this defect is compensated by sharpened vision. A strict critic of I. N. Kramskoy wrote to P. Tretyakov: “Aivazovsky probably possesses the secret of drawing paints, and even the colors themselves are secret, I did not see such bright and pure tones even on the shelves of moskatnyh shops.”

Aivazovsky was influenced by the Dutch marine painters of the 17th century, came to the “watercolor” painting technique, when the color is superimposed on the canvas by thin layers overlapping each other. This allowed the transfer of the most minor color-tonal gradations. He began painting Aivazovsky’s painting, depicting the sky, or as he called it after his teacher at the Academy of Arts, M. N. Vorobyov-the air. Whatever the size of the canvas, Aivazovsky wrote “air” in one session, even if it stretched to 12 hours in a row. It was by such a titanic effort that the airiness and wholeness of the palette of the sky were transmitted. The desire to complete the picture as soon as possible was dictated by the desire not to lose the unity of the mood of the motive, to bring to the viewer a stopped moment from the life of the mobile sea element.

The water in his paintings is an ocean of boundless, not stormy, but swaying, stern, endless. And the sky, if possible, is even more infinite. “The plot of the picture,” said the artist, “is formed in my memory as a plot of a poem by a poet, I sketch a piece of paper, I start to work and until then I do not leave the canvas until I express it with my brush.” Speaking of his paintings, Aivazovsky remarked: “Those pictures in which the main force is the light of the sun… should be considered the best.”