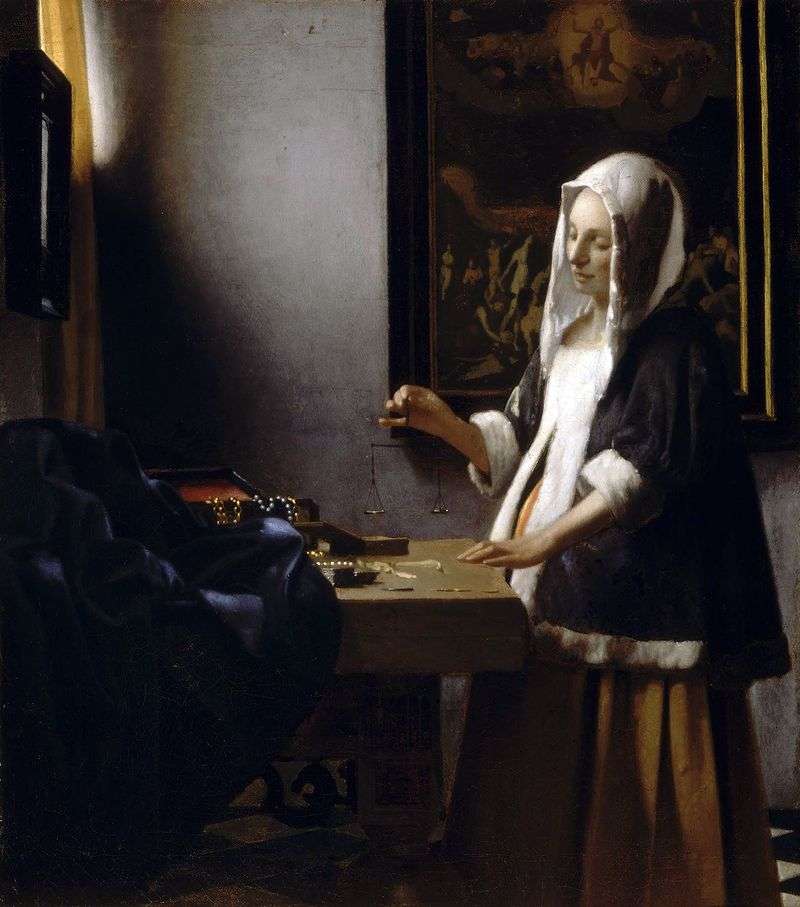 Painting of the Dutch artist Jan Vermeer Delftsky “Woman, busy with scales”. The size of the picture is 42.5 x 38 cm, canvas, oil. This work of the Dutch master is also known under the title “Measurement measure.” In his painting, the painter Vermeer depicted a young woman in a dim room, standing at the edge of the table. She looks at the scales of the scales, which she holds in her right hand, leaning on the tabletop, left.

There are three boxes on the table – one from the scales, a larger box for money, one silver and three gold coins lie on the table, and the largest casket

is ajar, a pearl necklace and a massive gold chain rest on its lid. A string of pearls with yellow ties also lies on the table. All together – pearls, money, gold – personify prosperity and some vanity, vain joys of life. In the left part of the picture there is a window closed with a yellow curtain, the same as in the picture “A Girl Trying on a Necklace,” and a mirror. Mirror appears only four times in the paintings of Vermeer.

The iconography of mirrors in Western painting is contentious, but most researchers tend to believe that it means self-knowledge and reflection of truth. All these details are important for understanding the basic idea of the picture. The scales in the woman’s hands are empty. She does not weigh pearls and gold, nor her own sins in anticipation of the Last Judgment. It establishes a balance between the joys of life and the requirements of the church. And the mirror reflects this truth.

It is believed that the picture was posed by Vermeer’s wife, Katarina Bolnes. She was also a model for his other paintings: “A girl with a letter at an open window” and “A lady in blue reading a letter.” She has the right beautiful features, big eyes, straight nose. During the creation of the picture, Katarina, who was a year older than her husband, was 32, which corresponds to the age of the depicted woman. The composition of the picture is extremely successful.

The combination of strict vertical and horizontal surfaces is softened by folds of tissues, the center of the picture – the hand of a woman – is not only a geometric but also a logical center. The direction of the diagonals – the picture frame and the floor tiles – also converge in this place. The arrangement of objects is subject to semantic content and reflects the mood, but quite naturally by nature. The combination of light and volume of objects creates a balanced, but dynamic composition of the picture.