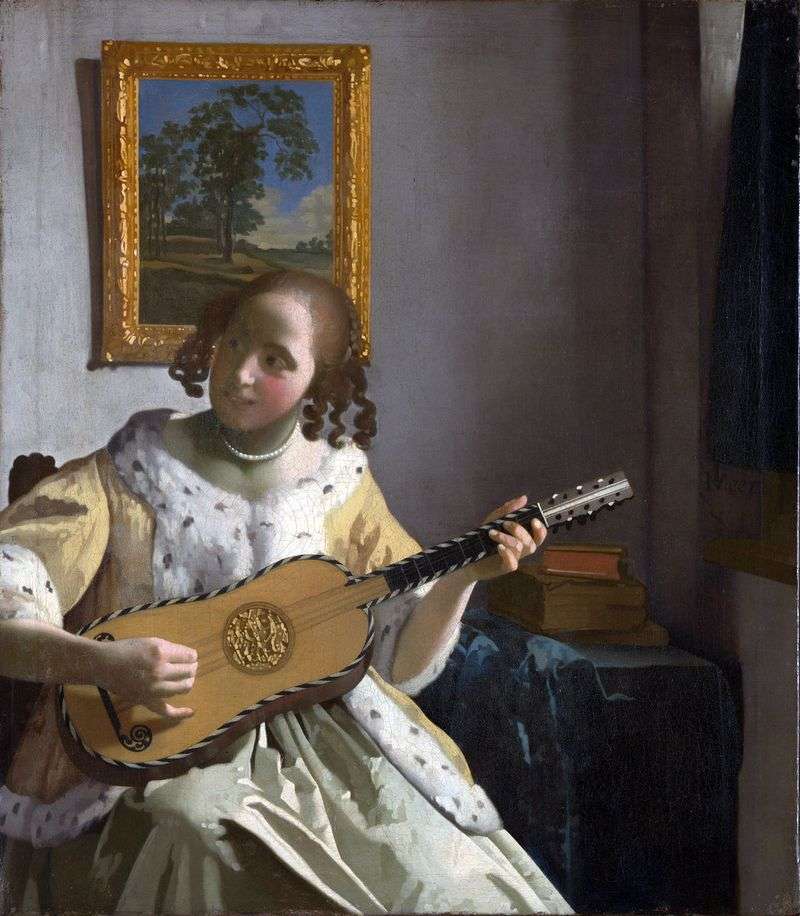 A painting by the Dutch painter Jan Vermeer Delft “A Young Woman with a Guitar”. The size of the picture is 53 x 46 cm, canvas, oil. This picture of the Dutch artist is known under a different, more conventional name, “Guitarist”, as well as “Lady Playing the Guitar”. Almost a third of Vermeer’s works are devoted to female music making.

Such a plot was quite popular in painting of 16-17 centuries. In the foreground is a girl playing the guitar. If you compare this picture with the other two – “Lacemaker” and “Portrait of a Young Girl”,

then obviously the similarity of the faces. Maybe posed the same model. The question whether this was one of Vermeer’s eldest daughters remains open. On the neck of the girl – a string of pearls, which the artist loved to write so much. It is in this picture that you can see how a pearl necklace is written: a strip of gray paint, then, on it, whitens of pearls are painted on it.

On the girl – a yellow jacket with an ermine edge – traditional women’s clothing in Vermeer’s paintings, and a white satin skirt. Skirt folds are written very contrastingly. The instrument in the hands of the girl is the so-called “baroque guitar”. This tool in the 15-16th centuries was considered to be vulgar, too loud, but gradually became fashionable in the Dutch burgher houses. Traditional was the performance of plays and romances to the accompaniment of the lute, which has a quieter, more chambered sound. In the Netherlands, the guitar came from France or Spain. The guitar then had 5 double strings.

The technique of playing on it was not very different from the modern one. Lute in the seventies of the 17th century was already associated with the idealistic past, the guitar was a symbol of the contemporary music artist, for it notes were written and published, more often – transcriptions of Italian, German, French songs and romances. Although the shape of the body guitar in the picture is more like a viel, the instrument is more “aristocratic”. Remarkably, the very image of the guitar: black and white edging “voiced” staccato, thick decorative strokes painted carved lattice resonator. If you look closely, the two strings are vague, as if they still sound.

On the wall behind the girl there is a picture in a gilded frame, on which several trees are depicted. The experts suggested that Vermeer used the work of Peter Jans van Asta “The Forest View with the Gentleman and Dogs in the Foreground” as a motive for this landscape. Vermeer, not a very big fan of painting landscapes, found a compromise – the girl is in the room, and nature is represented by a picture on the wall.

The slope of the girl’s head repeats the angle of the tree, and the lush foliage is curls of hair. The window on the right side of the picture is covered with a curtain, but through it the daylight breaks through. The room clearly has another source of lighting – perhaps this is the window to the right of the artist. On the table at the left elbow of the girl lie several books – perhaps it’s the Bible and the second book of religious content. Notes and novels in those days did not publish such “thick”, and the plot of the picture does not imply books of scientific content, as in the pictures “Geographer” and “Astronomer.” Some researchers on the basis of the composition of the picture managed to conclude that the young lady, having neglected the reading of religious literature, surrenders to vain pursuits and generally unwarrantedly enjoys life.

In the last period of his work, the artist’s style has changed – instead of carefully working out details and glazing, Vermeer writes in large strokes, modeling the shape with color, not shades. The girl’s clothes – a yellow jacket and a white skirt – are painted using contrasting colors. Only on the knee did the girl have an indefinite stain – perhaps the colors faded or it was not quite an understandable idea of the artist. The face is also written on the contrast of light and shadow – the picture turned out bright, elegant and exceptionally beautiful.