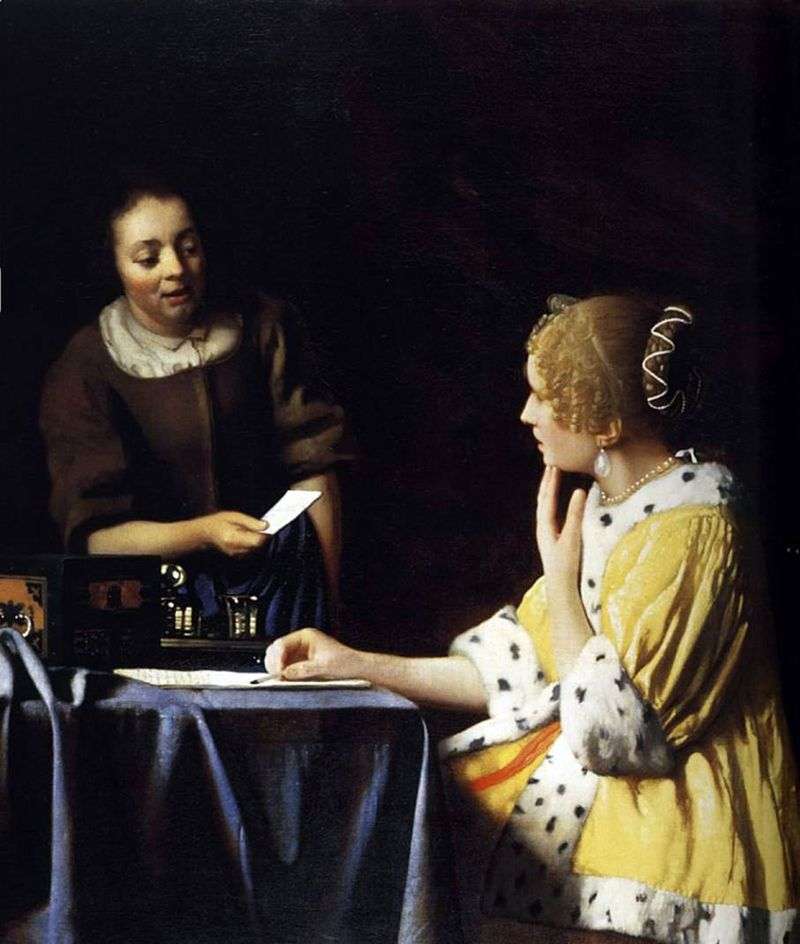 Painting of the Dutch artist Jan Vermeer Delftsky “The Lady and her maid with a letter.” The size of the picture is 89.5 x 78 cm, canvas, oil. In the late 1660’s, Vermeer wrote several paintings on the receipt and sending of messages. This picture seems to be a continuation of the picture “Girl writing letter.”

The composition is almost the same – a table covered with a blue tablecloth, a box, a written instrument, on the model the same yellow jacket with an ermine edge. But there was a second character – a servant, and the picture becomes less static. The hostess

sitting at the table raised her right hand to her chin and looked at the servant girl holding a letter in her hand. The viewer sees only her profile, but may consider a complex hairstyle adorned with a pearl thread. Pearl earring and pearls on the neck complement the outfit. The yellow jacket is written very carefully, the folds of the fabric on the sleeve look so natural that you can restore its pattern.

The bright yellow color attracts the eye. But then, following the direction of the view of the hostess, the viewer’s view is moved to the maid. Her modest brown dress with a white shirt allows not to be distracted from the expression of her face. She asks something from her mistress, holding out a letter to her. This gesture again returns the viewer to the lady in the yellow jacket.

In her left hand she holds a pen, apparently she or just finished writing a letter or just was going to write it when the message suddenly came. In any case, the picture shows a live dialogue, and a dark background, unusual for Vermeer, allows you to concentrate your eyes on the figures. Because of this dark background, the picture is considered unfinished, but, most likely, Vermeer simply paid tribute to Rembrandt’s school. The picture is quite large, women are portrayed at close range, which is also an exception for the artist’s works.

The color solution is also not quite usual. The purple shadow on the servant’s left hand seems quite natural against the background of her blue apron. The folds of the blue tablecloth on the table also have the same lilac shade.