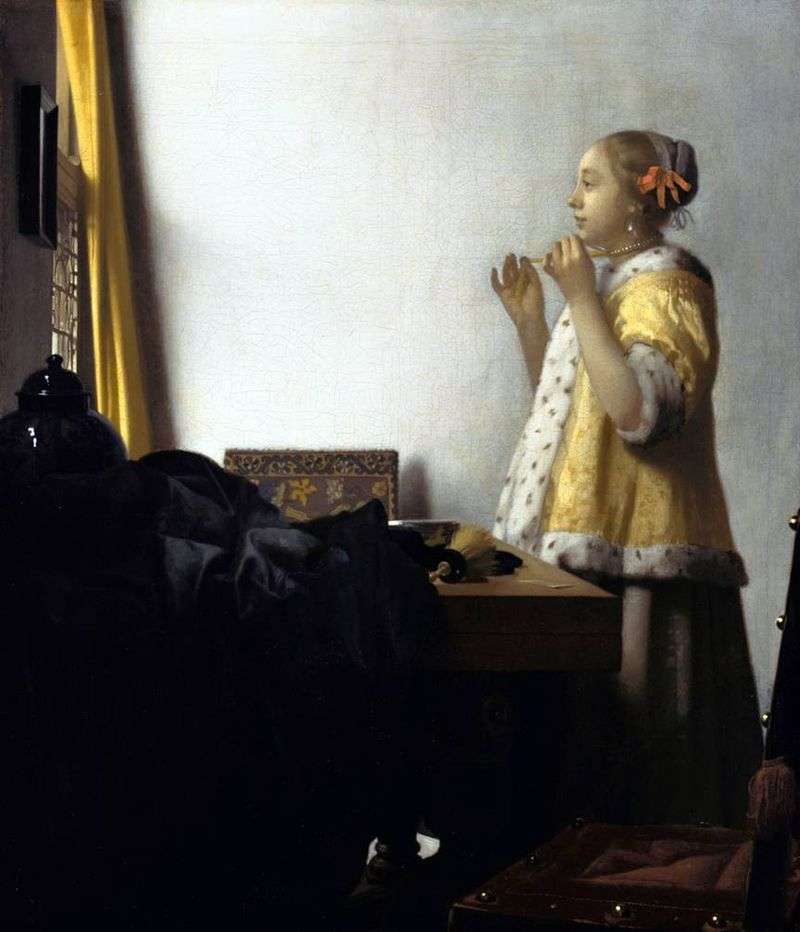 Young woman looks in the mirror, holding a tape from a pearl necklace. She stands at the table in the corner of the room lit by sunlight, and its silhouette stands out against the white walls. The composition of the painting is close to other works, but Vermeer gave the image more dynamic. As in the films “Woman with weights” and “Woman in Blue Reading a Letter”, a lady intent on her task. Laconic interior enlivened only by her presence. In the left corner of the room – with a stained-glass window, a closed light-yellow curtains.

On the wall – a mirror, the same as in the painting “Woman with weights.” On the table – a great Chinese vase, dark blue cloth, which folds soften strict space wooden countertop. At the edge of the table is puff and comb – fittings morning toilet of a young woman. Against the wall – rest upholstered tapestry chair, second chair – in the foreground, back and seat which caps with shiny decorative nails almost repeat the bottom corner of the picture. A woman familiar from other works of Vermeer yellow satin jacket, decorated with ermine and a yellow dress.

This jacket belonged to the wife of the artist, and is mentioned in the posthumous inventory of his property. Fancy hair girl, adorned with ribbons, earrings in the form of a single pearl, emphasize its high social status. Pearls in the European classical painting has several contradictory iconography. On the one hand, it was a sign of vanity and coquetry. But at the same time pearls symbolize virginity. In the hands of a woman’s necklaces tape. In the XVII century it had not yet been invented jewelry clasps, and similar decorations just tied ribbons.

Yellow curtain on the window in harmony with the color of clothes a girl, a combination of yellow and dark blue color gives a picture of perfection. Illuminated wall unites the left part and right of the canvas. This work Katarina, wife of Vermeer, kept in his bedroom, and until recently did not want to sell after his death. It is therefore considered that the painting – it was she. In the year of its creation Katharine was 33, perhaps Vermeer painted it several younger.