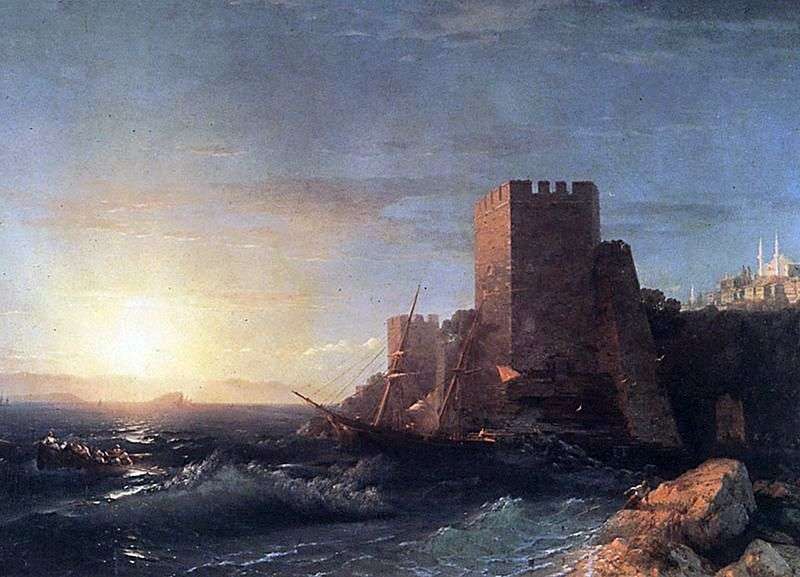 Foaming green waves, rolling on a high stony shore, and in the waves beating like a wounded bird, trying to swim away from terrible rocks, avoid death, but not in strength… The element is stronger – pulling, tearing sails, they fall and crumble torn rags.

The sailors are rescued in the boat – everyone looks longingly at the ship, he was both his home and his friend, but he is already drowning and he can not be saved anymore. A lonely man stands on the rocks at the edge of the surf, perhaps a sailor, who, before others, threw himself into the waves and emerged, perhaps some idler who had heard the terrible crack of the tree beating against the rock.

The old tower looks lazily at the drama unfolding at its foot. Far away on the hill shining white city shines – high towers, spiers of cathedrals, cozy houses. And over the sea the sun rises, pouring all around with golden rays, it gives hope that the storm will end. and even here, at the cliffs, the sea will be more calm.

The picture creates a very dramatic mood, but also very bright – it seems almost cynical, but the world is like this: not all ships sink in a storm, not all people who fall into a storm die. And the sea does not care when it will throw an utter vessel-ship on the rocks-early in the morning or in the autumn night.

The sea is indifferent, because that is his nature. Infinitely wise, detached and changeable, it sharpens the shore, because “A drop of stone sharpens.” Someday the Bosphorus will have a splash of another sea – majestic, calm, boundless, – the same as it was at the beginning of the century.