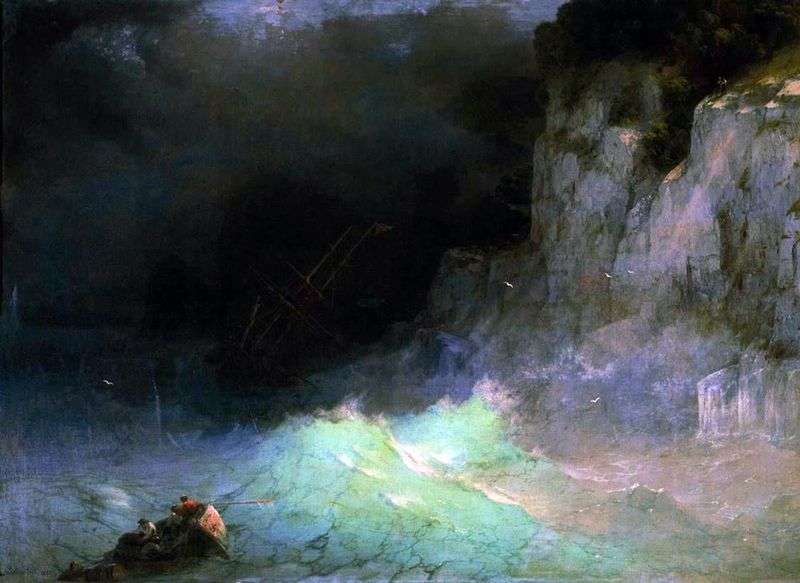 Aivazovsky is an artist who, above all else in the world, appreciated and loved the sea, his singer, in whose pictures it always acts as the main character. Even if they suddenly happen to people – because people sometimes swim on the sea – the main thing is still it, the all-consuming element, always remaining greater than any person.

“Storm” is a hymn to this side of the sea. His all-consuming power, sweeping, destroying and at the same time indifferent. Man kills a man because he hates him. The sea kills a man, because he does not notice it, just turning slightly on his sandy bed.

ship on the horizon appears in an obscure shadow. He looks more like a ghost from a tree. The sails are broken, the mast must have crashed – the waves carry it directly to the rocks, without pity, intending to break it with a hellish crash and screech.

In the foreground the boat dangles. The faces of the sailors are not visible, but they are surely desperate – they row from the rocks, with all their might, but they can not fight with the sea. Soon they will also be thrown on a stone, where they will perish – from a blow, from fractures.

At the same time, the sea remains beautiful. Delightful. Charming. As a wild beast, it bewitches, its waves are like the color of the sky, they beat in the cage of the shores, they roar, devouring themselves. Taken from the sudden flash of light in the clouds, a bright spot appears to be a saving island of silence. Subconsciously it seems that if the sailors manage to swim in it, the storm suddenly stops and they can safely swim to the shore and land on it.

However, this is just an illusion, a visual illusion. No matter how attractive the sea is, it will not spare any of those who accidentally came to him in moments of his wrath.

This mixture, admiration and horror, Aivazovsky gave very precisely. Watching the “Storm” is like remembering death.