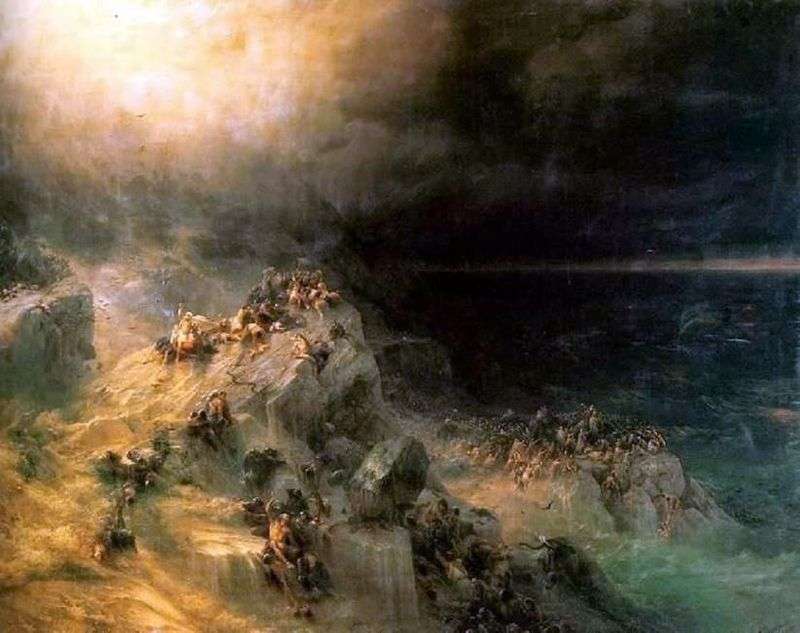 Belonging to the Armenian Apostolic Church, Aivazovsky created a number of paintings on biblical, as well as historical subjects.

In 1862, Aivazovsky wrote two versions of the painting “The World Flood,” and then during his lifetime repeatedly returns to this biblical story. One of the best variants of the painting The Flood was written by him in 1864.

It is the sea that usually appears to him as the universal foundation of nature and history, especially in plots with the creation of the world and the flood; however, the images of religious, biblical or evangelical, iconography, as well as of ancient mythology, can not be ranked among his greatest fortunes.

Creative personality and worldview of the great seascape their national roots even when life connected it with the Armenian culture. Biblical Mount Ararat – the symbol of Armenia – Aivazovsky wrote no less than ten times. Descent of Noah and Ararat he first exhibited in Paris, and thence, when the fellow asked if he had any Armenian types, led them to the picture and said: “Here is our Armenia”.

Subsequently, Aivazovsky gave the canvas to the Novo-Nakhichevan school. During the Civil War, the school was turned into a barracks, alternately occupied by white and then red. The picture was covered with a break in the door. Once the break was covered with a board, and the picture disappeared. The kidnapper was Martiros Saryan, who had once studied at this school. In 1921, among the collected works of Armenian art, he brought the “Descent of Noah” to Yerevan.

Among the paintings with a historical plot is the picture of the Baptism of the Armenian people, which at one time adorned one of the Feodosia Armenian churches and aroused patriotic feelings in the parishioners.

The plot for the painting The baptism of the Armenian people served as a turning point in the history of Armenian culture. Its flourishing was facilitated by the adoption of Christianity by the Armenians. At the very beginning of the IV century, this religion was legalized in Armenia as a state religion. Armenia, thus, is today one of the most ancient Christian states.