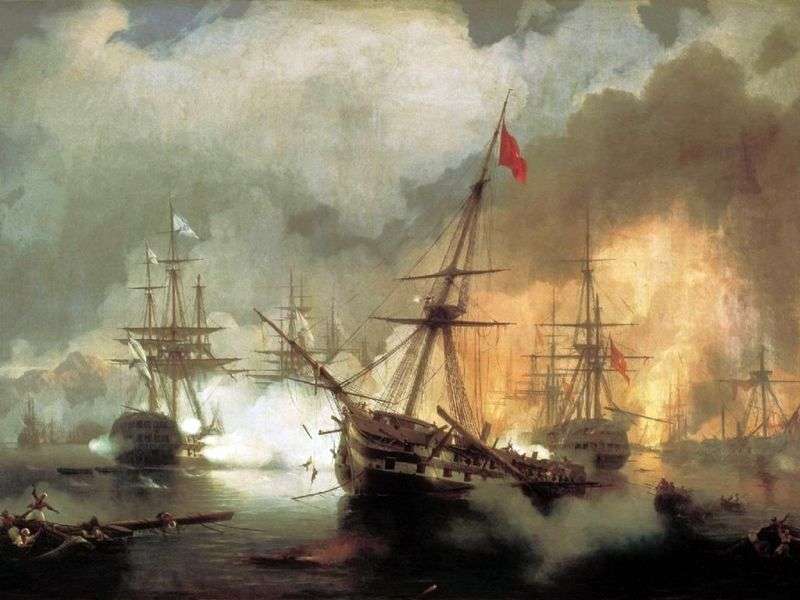 This famous battle glorified the Russian fleet. The Allied Allied Fleet entered Navarrin Bay, where the Turkish-Egyptian fleet was concentrated. After fruitless attempts to negotiate, after the firing of the allied fleet by Turkish ships and coastal batteries, in October 1827 the Navarin battle began.

Russian battleships, being in the center, assumed the main blow of the Turkish-Egyptian forces and destroyed the bulk of the enemy fleet. The line ship “Azov” under the command of Captain Irang MP Lazarev fought with five enemy ships, but in an unequal battle they were defeated. The youngest officers

on this ship were P. S. Nakhimov and V. A. Kornilov. Crew “Azov” covered himself with unfading glory. The whole world admired the valiant Russian fleet, courage and martial art of Russian sailors.

Aivazovsky depicts “Azov” is already badly damaged, but the crew of the ship is boarded by a Turkish ship, and the heroic Russian sailors pass to its deck to complete the destruction of the ship. With great skill, the artist shows a picture of the battle: fire, devouring ships, smoke everywhere, obscuring the view, wreckage of ships, people trying to escape…