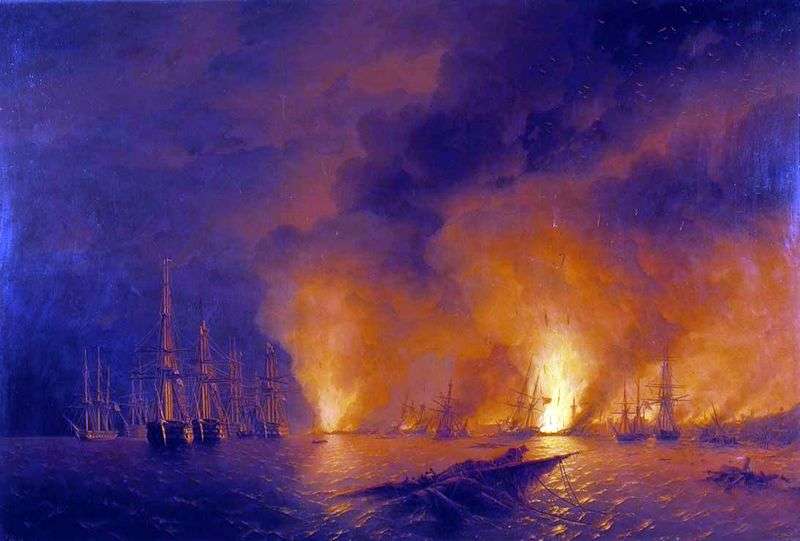 Painting Ivan Aivazovsky “Chesme battle” was written in 1848. It is dedicated to the historic event of 1770. On the night of 25 to 26 June, a sea battle took place in the Chesme Bay between the Turkish and Russian fleets. It ended with the complete defeat of the once-magnificent Turkish fleet by Russian sailors. A great victory, which brought glory to our fleet, and Ivan Aivazovsky wanted to show on canvas.

The battle took place at night. Therefore, the battlefield itself is illuminated by the fire of burning ships. Around the battle is very dark and only the moon is ominously drawn among the smoke. The sky is shown in black, the stars are not visible. With the reflection of the moon, the tragic events unfolded, which led to the death of a large number of people.

In the background of the picture are the burning ships of the enemy. Here is shown the fire of not one or two ships, but an entire armada. A single ship started a fire that destroyed a powerful Turkish fleet. Part of the Turkish ships went to the bottom, the rest of them burn out. It can be seen that the battle ended recently. In the foreground are depicted fragments of the ship, on which people try to escape from imminent death. This is most likely the Turkish sailors, who are in panic over the events that are taking place.

In the direction of the Russian ship, a boat sails with Russian sailors, who, apparently, caused damage to the Turkish flotilla, setting the arson of this first ship. The ships of the Russian squadron are shown unharmed. They remained so thanks to the skillful tactics of conducting combat. Russian ships proudly rise in the foreground. The picture shows a contrast of dark and light tones. There is a battle between dark and light forces. The flagship of the Russian fleet is in the foreground. This indicates the victory of Russian sailors who fought a righteous fight for their homeland.

I. Aivazovsky showed in his painting the majesty of the feat of the Russian people. Seeing this picture, each person is proud of the Russian sailors who accomplished the feat, defeating a strong opponent.