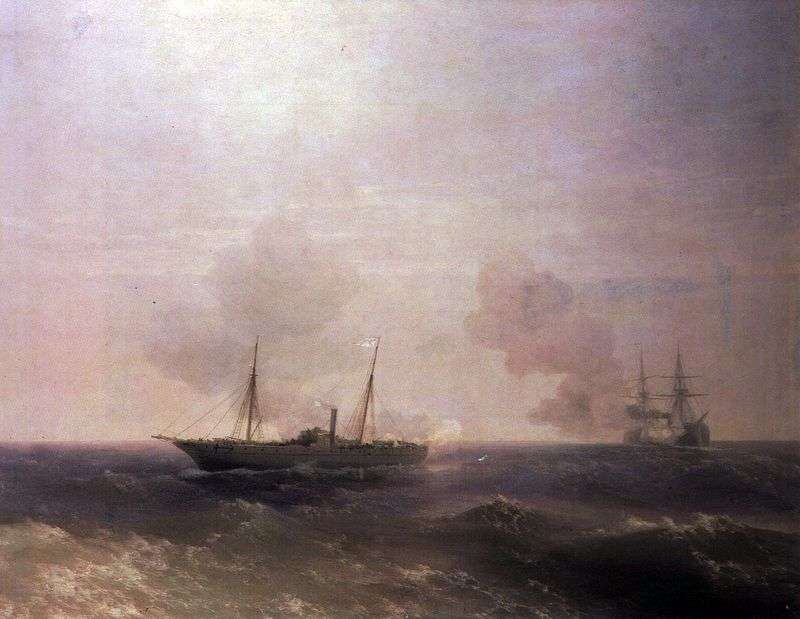 Ivan Aivazovsky Vesta steamboat combat with the Turkish battleship Fehti-Buland, description of the painting Russian Marinist Ivan Aivazovsky, in addition to sea scenery, he liked to depict scenes of sea battles The name of the battle Vesta steamship with the Turkish battleship Fehti – itself for itself. The painting depicts two fighting ships during the Russo-Turkish War.

The steamer Vesta was approaching the Turkish battleship to cut it off the coast, but in response, a volley from the enemy ship sounded at once. The spectator is presented with a moment of a long firefight between the opponents. Against the background of the wide expanse of the endless blue sky, warships battle ships in a troubled stormy sea. White, bubbling smoke from exploding shells rises in the air. “Vesta” holds its positions, but it seems that it is trying to get away from the enemy, because as a result of this fight, it will suffer serious losses.

A troubled sea, playing with ships, as if trying to overwhelm them with strong waves and stop this battle. In the cold coloring of the painting, an air perspective is transmitted by color. Waves in the foreground are written in greenish, ocher and emerald hues.

The sea closer to the horizon consists of blue, lilac pastel colors, which creates an air space in the picture. On a gentle blue sky, small clouds are barely noticeable. The sun is not pictured in the picture, but its light gives a pale yellow shade to the whole environment. Due to the low horizon in the composition of the work the artist allocates a wide expanse of the sky.

Therefore, the ships seem small and helpless in this vast space. Perhaps this is the artist’s intention to show the insignificance of such events as this sea battle, compared with the beauty and grandeur of a mighty nature.