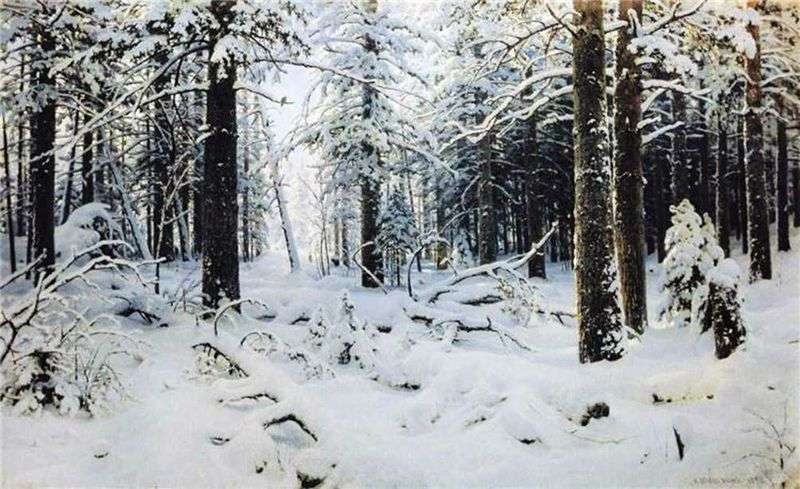 Ivan Shishkin’s painting “Winter” refers to the late period of the artist’s work as a landscape painter who has long dreamed of depicting a winter forest with frozen trees and snowdrifts. The canvas was finished in 1890, on it the artist showed a snow-covered forest, sleeping under a white blanket of snow. Massive dark trunks stand out clearly against the background of light snow. Young Christmas trees are covered with snow-white snow.

The branches of the trees bend under the weight of the newly fallen snow. It fascinates the greatness of sleeping nature, attracts the spectator’s eye. The contrast of a gloomy dark forest and light air snow makes the viewer feel the strength and power of the dozing nature for the time being.

A small ray of light, penetrating into the thicket, stains the depicted small glade in golden color. Glade littered with a windbreak – perhaps the branches of the trees could not stand the last heavy snow. And, like a native light, a clear spot is a clearing in the winter forest.

Tranquility, silence, beauty, snow-covered nature. There are no traces in the snow, the forest is dead, life in the picture is frozen. An exceptional reality and a certain fairy-tale character are inherent in the image. Masterfully transmitted by Ivan Shishkin with the help of gray and yellow tones, the play of light shows that the winter forest is still not completely lifeless. Looking closer, you can see on the branch a small bird, which magically attracts the viewer’s eyes.