Home ⇒ 🎨Giorgione ⇒ The worship of the shepherds by Giorgione 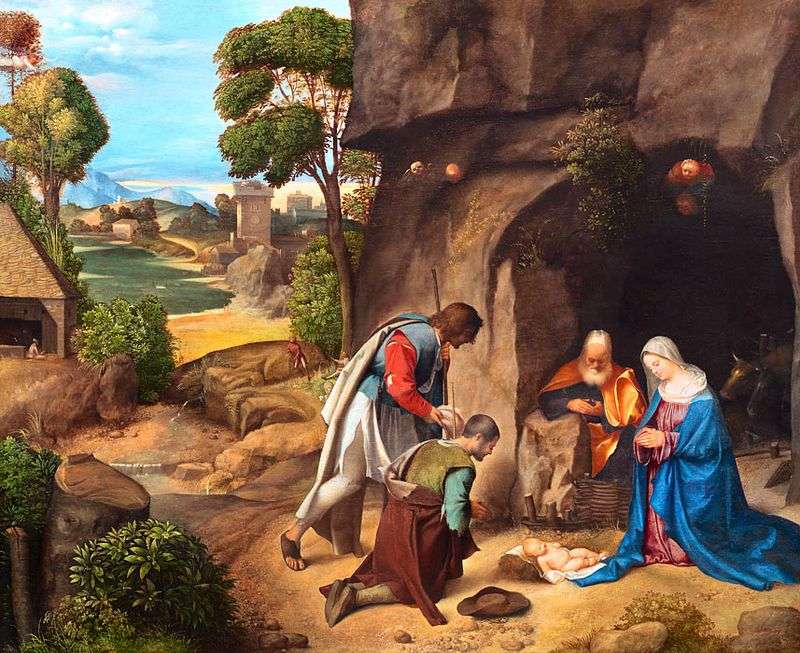 Unlike many of his contemporaries, Venetian masters, Giorgione did not write large multi-figured compositions. In his works he was not a word, the essence expressed an internal associative interpretation of the plot, often giving the viewer the opportunity to think and understand the picture himself.

In the “Adoration of the Shepherds”, in addition to the obligatory figures of the Holy Family and the kneeling shepherds, the landscape occupies a significant place – not just the background, but an active participant in the action. Its deep-seated perspective on the horizon is enclosed by blue mountains, which creates a natural sense of space and air.

A special role in lighting, which was different: the clear purity of the early morning, characteristic of the work of the quattrocento, was replaced by a soft afternoon light, which gives the picture greater integrity and dimensionality. The dark brown tone of the cave beautifully and contrastfully emphasizes the colors of the clothes of Joseph, Mary and the two shepherds, whose bent backs are smoothly and rhythmically repeated in oval lines, outlining the entrance to the cave, near which the heroes are located.

About the artist’s activity very few documents have been preserved. Not found a single subscription painting Giorgione, some of his unfinished works are known today only for engravings and copies. Attribution of works of the master represents a rather complex problem that has caused controversy among art historians since the XVI century. Today, most researchers are inclined to believe that the author of The Adoration of the Magi is Giorgione, although in the twentieth century there was much discussion about this.