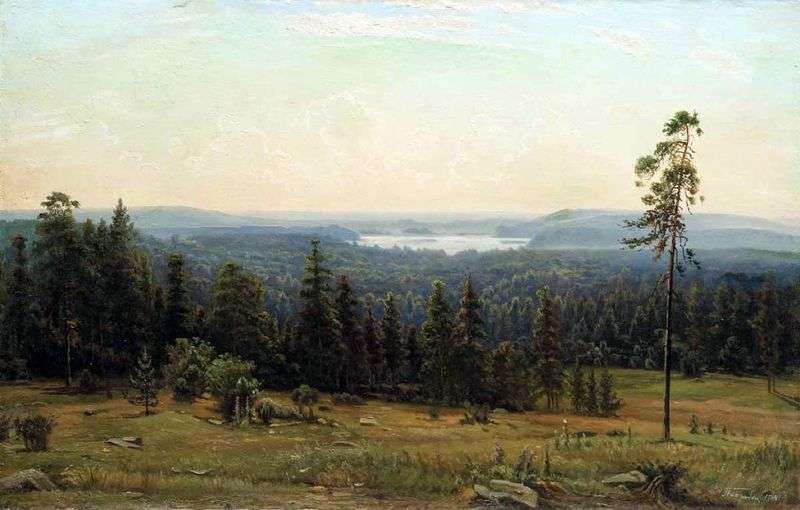 In this picture, the artist pours out his love for his native land. It is a vivid testimony of why Shishkin is called the “king of the forest”.

In the foreground there is a forest clearing, from which the forest masses gradually spread out into the distance. The bright green of the grass contrasts with the dark green of foliage and needles and a light gray tinge of sky-clouded sky. In the background, a small pond is represented as a bright spot. This unexpected glare of light gives an unusual accent to the usual landscape story, turns it into a fabulous panorama panorama.

The untouched Russian nature appears with all lyricism and pacification. The view of the viewer in the foreground is attracted by a lonely standing old pine, strangely stretched upwards in an empty space. Usually unconventional forms of branches are typical for trees growing in crowded conditions. From it on the middle plane from right to left there is a strip of trees, gradually increasing in height. This unusual composition gives the picture a certain degree of realism.

The forest thicket in the background does not at all seem uniform. This effect is achieved by the artist due to the use of the now lost technique of “valera”, that is, the ability to paint a painting using the subtlest nuances of color, light and shadow. Shishkina is considered the “king of the valera”, due to the possession of a subtle sense of closeness to nature and an almost jewel-like feeling of the light and air environment.