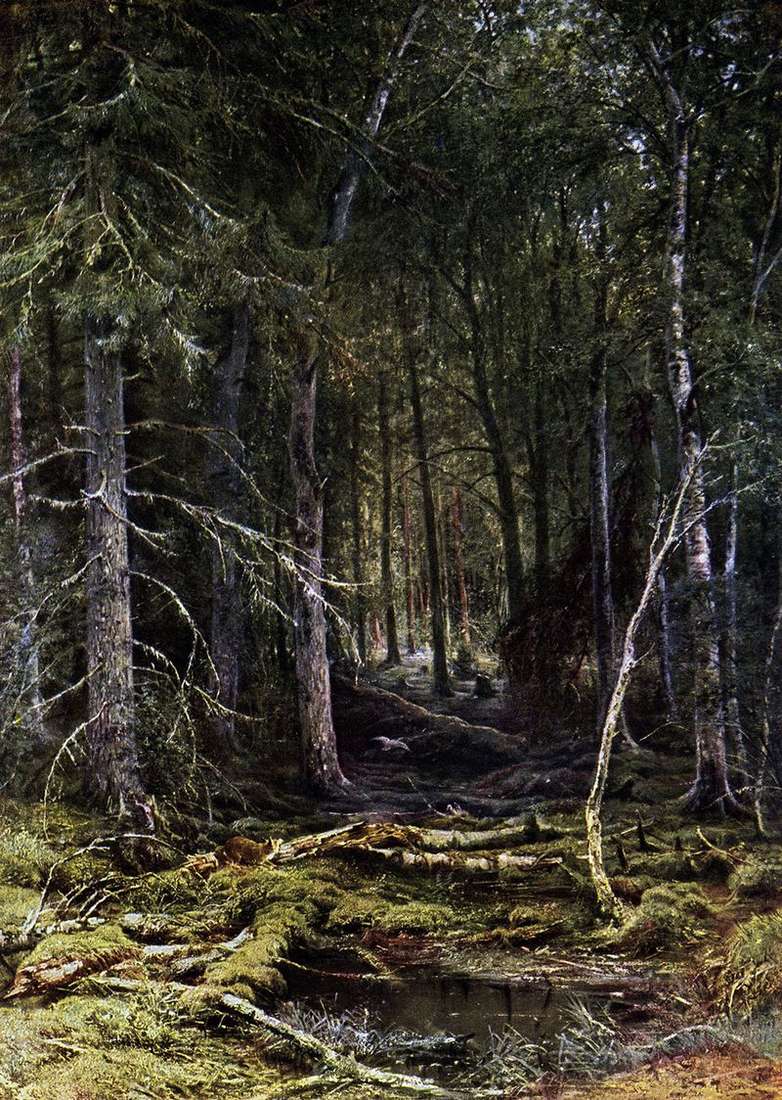 In 1872 Ivan Shishkin’s talent was actively developing. Just at this time, his views on art are being formed. This year the artist paints the canvas “Forest Wilderness”. I believe that this is exactly the place in which there are never people. In such a wilderness no one will go, and it will not get so far. Here is the kingdom of animals, where they are not disturbed by people, and they can live freely, without fear.

The thick, dense forest seems to know many secrets, but it never tells anyone. There are no felled trees in it, they fall only from a strong wind. Perennial fir trees reach for the sun and spread their branches, interlacing them with branches of neighboring trees. Left and right between the trees do not even see a gap, a real wilderness. But in the center as though an exit and the small sunlit lighted by the sun is visible, behind which the unapproachable wood again begins.

In the foreground is like a swamp. There are several fallen trees on it and some of them are already completely covered with moss. If a person were in this place, it would be unlikely that he could overcome this swamp. The sensation that the unsteady place stretches right up to the clearing where the sun can be seen. Therefore, it is dangerous for a person to be in such places, because the swamp is an insidious place.

You do not immediately notice the fox on a log by the swamp, which frightened off some bird. Compared to the majestic trees, the animal looks so small that at first glance at the picture it can not be seen. This landscape of I. I. Shishkin bewitching and makes you look at it for a long time. When you look at the Forest Wilderness for a long time, every time you see more and more details that you did not notice at first. Looking at the canvas, it seems that in this forest absolute silence and only the wag of the wings of the frightened bird break this mysterious silence.