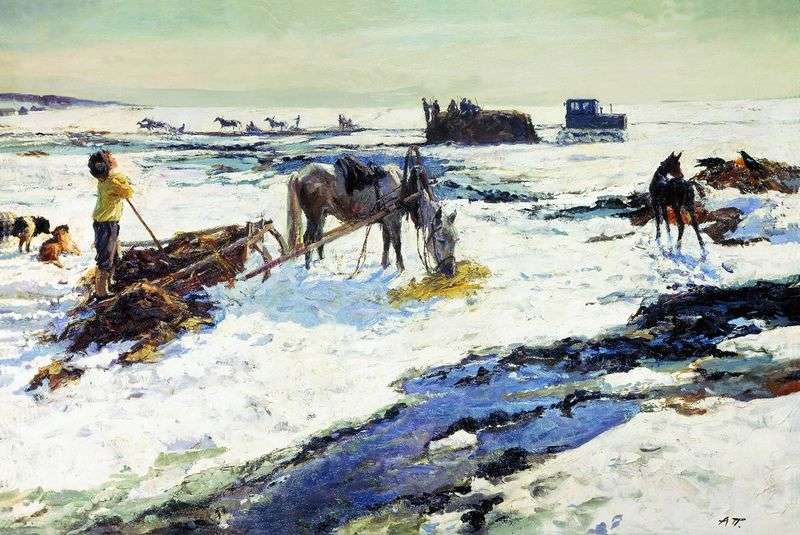 Beautiful Russian artist Plastov Arkady Alexandrovich left an unforgettable treasure and contribution to the painting of the modern people. His paintings are stories about the life of the peasants of Russia, which was and never will be. Many of his works are printed in school textbooks.

Most of all I was struck by the painting “Village March”. Perhaps because the street is spring, and the whole earth is still covered with snow. Nowadays, this is rare, as there is very little snow in winter, and until spring there is no snow at all. In the picture the author depicted the field. Apparently, this is the collective farm land and all the people of a friendly team set to work. The tractor is carrying somewhere a large hay bale on which the workers are sitting. In the distance, almost on the horizon, several carts somewhere went one after another. And in the foreground, the author showed us a boy who is standing on a sled and puts his face to the sun.

Warm rays warm the cheeks and make the lips blur in a smile. The fact that the heat can be seen from running trickles from melting snow, from dogs playing on snow, from joyfully whining rooks who catch worms. Even the boy took off his outerwear and works only in one shirt.

It is impossible not to notice the farthest view of the picture. If you look well, then in the left corner you can see the small houses of the village and the blue woods. The sky is slightly covered with clouds and gives a beautiful spring turquoise. The picture is just wonderful. In such a beautiful weather, I don’t really want to work, but debt calls.