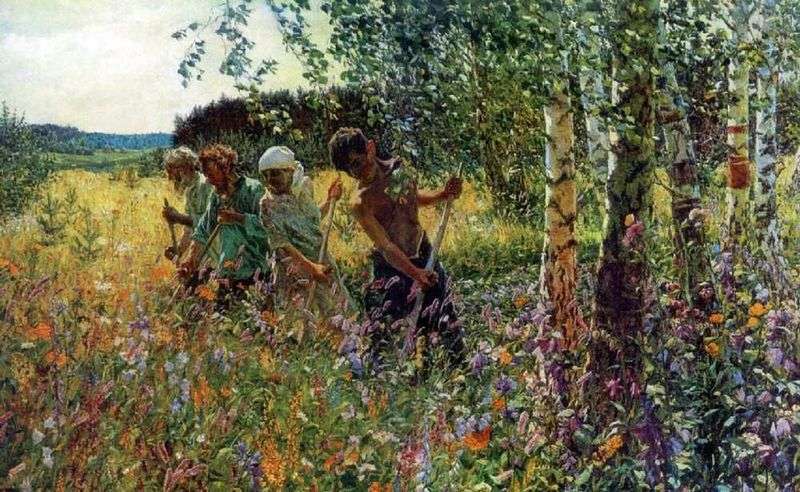 Arkady Plastov’s “Haymaking” is one of the most famous works of the artist, which he wrote in 1945. The picture depicts the height of summer, a flowering meadow fascinates the viewer with its bright colors, it seems that the work is filled with sounds: the braids are singing, the grass and leaves rustle, birds chirp, insects buzz. Summer in the village, even for children, is not just rest and holidays, it is work and help for the whole family. In the village, haymaking, as a rule, began in the middle of summer – July. The peasants spent whole days in the field, working together harmoniously, encouraging themselves with songs.

The picture “Haymaking” shows the audience not only a difficult peasant work, but also a kind of unity, the harmony of man and nature. It seems that in the picture there are also smells: freshly cut grass, warm fragrant breeze.

Arkady Plastov grew up in the village, therefore, like no one else, he was able to convey the mood and feelings of a peasant family working in the field. The teenager, deftly wielding a scythe, seems not at all tired, apparently the fact is that during the recent war, remaining the head of the family, he was accustomed to fully rely only on his own strength. A woman in a simple dress and scarf is a collective image of a peasant of those years. She is also tanned and ready for hard work – the war has hardened her. The next character is a middle-aged man, only after returning from the war, he immediately took over the farm into his own hands – it is impossible to hesitate, otherwise in the winter the whole family will suffer from hunger. The last mower – a man in years, with a gray beard, survived a lot, but he also tries to keep up with young and strong workers.

The accuracy of the transfer of the image by Plastovy can be compared with the photographic nature of Shishkin’s works, the brightness of colors – with the works of Kustodiev, the love of his native nature – with the works of Levitan. Flower meadow is replete with a variety of shades: and red, and purple, and pink. Not without the traditional symbol of Russia – elegant slender birch trees.

Arkady Plastov’s painting “Haymaking” is a real hymn to both native nature, and peaceful life, and hardworking people. All the beauty of summer Russian nature is not perceived here in isolation from simple peasant labor.