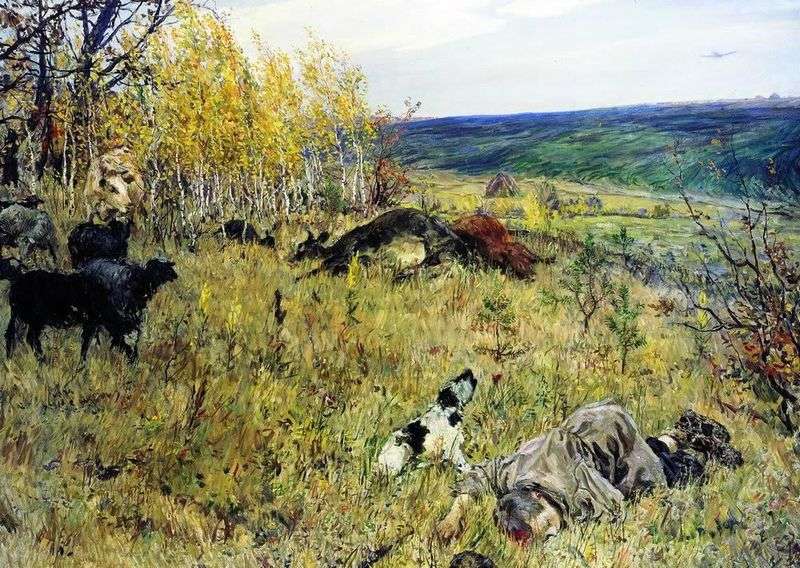 Arkady Plastov’s Fascist Flew by, one of the few that, in my opinion, does not fit his traditional images. For me, this is a contradictory picture. It depicts nature and all its beauty, but at the same time marred by war and doom. The whole simplicity of life is depicted in other pictures by A. Plastov is missing here. During the war, no one experienced a simple life, it was difficult and with great losses.

Not knowing the name of the picture, but simply looking at it, you might think that this is a simple autumn landscape. But looking closer, you understand what kind of suffering and pain are depicted here. In the foreground, lies the lifeless body of a young cowgirl. His loyal friend-dog howls side by side according to his master. He as if asks him to stand up and play with him. Herd of cows looking at them. Some hid in the bushes, and some are already dead. They, like their shepherd, came under fire from a Nazi aircraft, which is visible in the distance.

Even more pain and longing brings the background. Light sky, endless green fields, golden trees. Such beauty is impossible not to admire. But there is no one to admire. Just thinking about it all dimmed like a boot. What a pity that millions of people suffer from the greed and indifference of individuals. They become only dark spots, lying breathlessly on damp earth.

I think this picture, using the example of just one poor boy, the author wanted to show how much you need to appreciate life and not only your own, but all that is alive. All our actions affect all living things, including people with whom we are even unfamiliar. Therefore, before you do something for yourself, think about others. Life is given to everyone, and no one has the right to take it away through his whim.