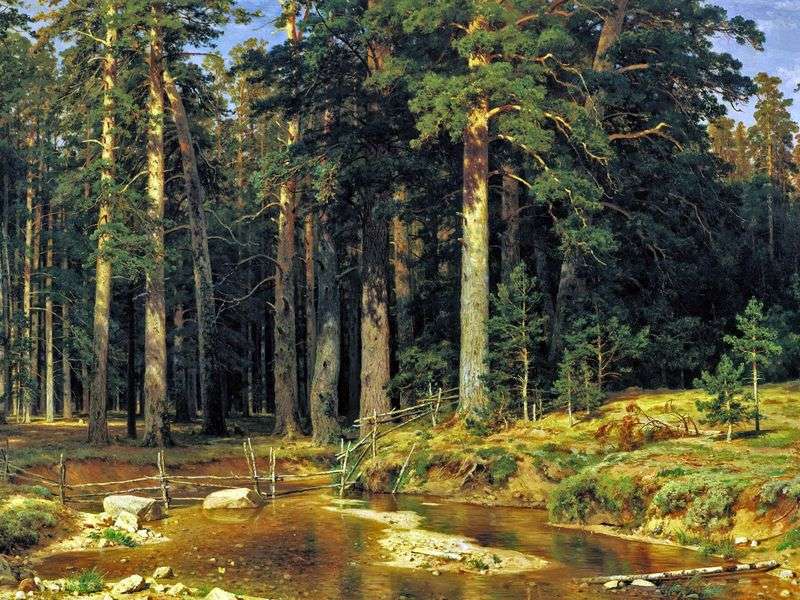 On the canvas is presented a typically Russian forest landscape with the rising mighty wall of a thick coniferous pine forest. Its outfall literally bathes in the rays of the blessed summer sun. His dazzling light not only gilded the crowns of trees, but also, igniting the quivering glow of the glare, penetrated into the depths of the forest. The impression of the picture from the viewer is created such that he wakes up in a wry, tart smell of sun-heated pine forest.

Warm up to the very bottom seems and the water of a glandular creek, flowing from behind the trees. Permeated with light and every grain of exposed soil of its bed.

It seemed that in this picture there are no particularly bright colors, as there are none in the pine forest in reality – with its monotonous coloring of the green harvesting of trees and their trunks. There is also no variety of plant forms in the picture, as it is not found in the pine forest, where only one species of trees reigns. There is still a lot of things, it would seem…

Meanwhile, the picture immediately captivates the viewer with the national peculiarities of the Russian landscape – its majestic beauty, strength and strength. Specific earthly forces of nature in I. Shishkin seem to unearthly powerful, absorbing everything random, low and small.

The first impression of the picture is a majestic calm and equanimity. I. Shishkin wrote it, not looking for those changeable effects – morning, rain, fog, which he had before. This canvas seems to resemble the “Pine Forest”, but the difference between them is very significant. If the trees in the “Pine Forest” were depicted entirely – completely with the sky above them, then in the “Ship Grove” the bushes and trees on the left of the canvas disappeared, while others moved to the viewer and occupied the entire canvas. The structure of the pines has leveled off, and the contrast of near and remote is absent. In return for the previous details, I. Shishkin finds another way to attract the attention of the viewer, contrasting those similar and different motives.

In the center of the picture, he highlights a few pine trees illuminated by the sun. To the left of the pines go into the depths of the grove, then appear in the light, then hide in the shade. On the other side of the canvas is a solid green massif. Next to the mighty trees that have been living for hundreds of years, I. Shishkin depicts a young shoot that is replacing the old giants – thin pine trees stretch upwards, speaking of a young life. The tops of huge trees hide behind the frame of the picture, as if they do not have enough space on the canvas, and our eyes can not cover them entirely. Immediately in the foreground, thin perches are thrown across a shallow streamlet, spreading across the sand with a layer of clear water.

“Ship Grove” was written by the artist under the impression of the nature of native places, memorable to I. Shishkin from childhood. In the figure to the painting he made the inscription: “Afanosofskaya Korabelnaya Grove near Yelabuga”, and Ivan Shishkin completed this creative path with this canvas.