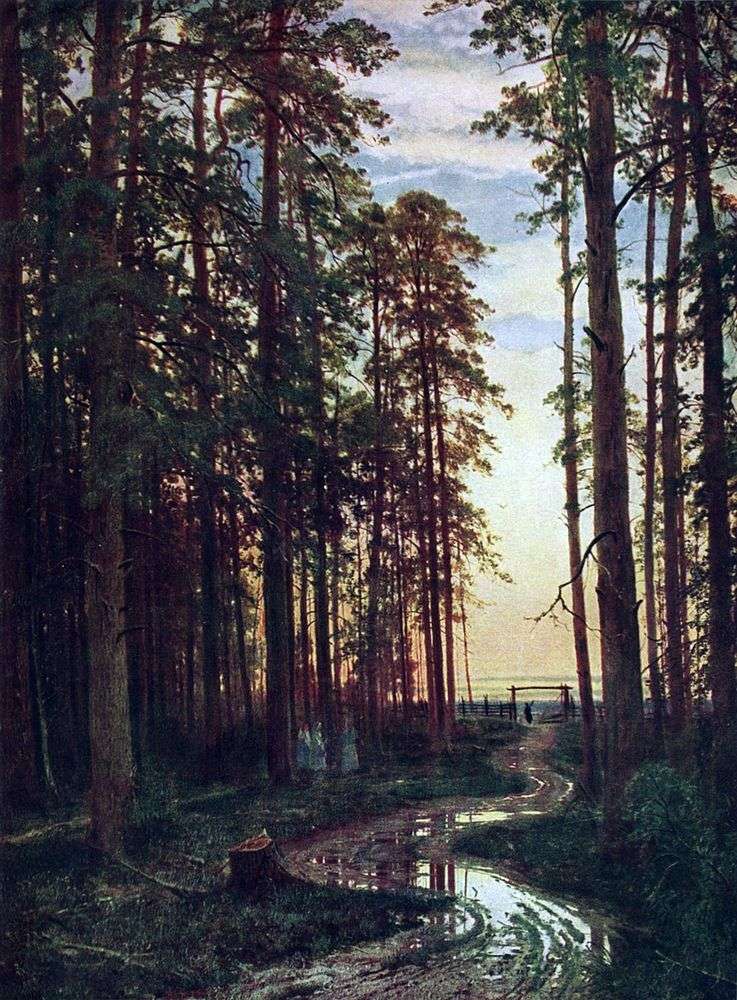 A large epic painting “Evening in the Pine Forest” was created in 1875. This work of I. I. Shishkin can be found in the State Museum of Fine Arts of the Republic of Tatarstan in Kazan.

The picture is majestic and beautiful. A feeling of boundlessness, inescapability, inexhaustibility of the beauties of Russian nature is created.

The forest looks gigantic, inspiring trembling before its greatness and strength. The special atmosphere of the evening intensifies the necessary contrast, liberates the shadows, involves beyond the sensual, into the space of a shaky evening half-asleep.

The nature in the picture is presented after the rain: fresh and light in its breath. Realistic canvas gives the image of several human figures, so tiny in comparison with the high pine forest, but, nevertheless, distinguishable against the general background.

Pass-through light appears before us as a mystery, a rare frankness, a kind of prayer, a silent prayer of nature itself.

The sky in the painting is painted with sunset fiery flaming colors, reminding a complex coloristic stretch.

The composition attracts and binds the consciousness with a feeling of coziness, something very familiar, as if snatched from childhood. And it seems that such a spatio-temporal “slip” overturns the everydayness, with all the routine and senseless monotony inherent in it, inviting to the world of a distant and forgotten, seemingly irretrievably gone, but remained in the heart a pleasant, hardly trembling stream of smiles, tears and memories.

Only one episode, the landscape, and how many experiences and feelings he awakened. Therefore, the work of the artist, who managed to touch the soul itself, tried to determine the mystery of Russian nature, the mysterious Russian soul, is so precious and precious to us.

The departing day, the departing hunter, a special perspective construction – all this in unity gives rise to a memorable and unlike image, casually noticed by us and, perhaps, he will remain with us forever in our memory, albeit for a brief moment, albeit only for a moment.