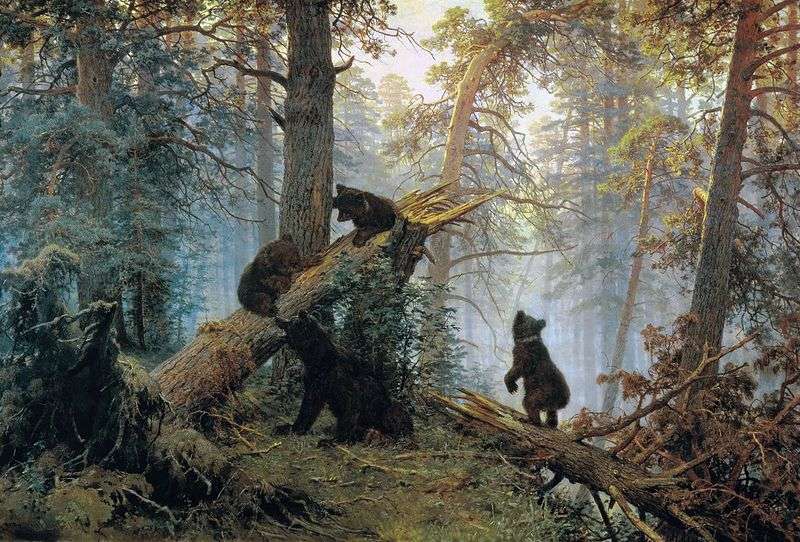 On domestic space, you will not find a second such “hit” painting, the plot of which is present on a rarity grandmother’s coverlet, embroidered dumpling, tablecloths, plates and even on wrappers with cute foot-lops. Parents’ memories, chocolate sweets and walks of PR people – that’s what keeps us from forgetting the picture of I. Shishkin “Morning in the Pine Forest” or, in the common people, “Three Bears.”

But only Shishkin? Bears on canvas painted K. Savitsky, who initially portrayed two toe-toed, and then raised their number to four. It used to be that Shishkin, despite his rather significant success in animalistic painting, was unable to portray bears, so he simply exploited poor Savitsky and did not even allow him to subscribe to the picture. In fact, the artists were friends, and the bears appeared only after the latter said that the canvas was non-dynamic. Shishkin could draw anyone, but not bears, so he gave Savitsky the opportunity to revive the picture and sign it. Collector P. Tretyakov was not so loyal: he bought a picture from Shishkin, which means that his authorship, so that there can be no Savitsky. In general, the inscription was erased and “Morning in the Pine Forest”

Candy “Bear-toad” with a Shishkin reproduction on a candy wrapper and named the canvas “Three Bears”. Appeared delicacy had a filling of almonds, cocoa beans, was expensive, but it was so delicious that even the agitator of all and all V. Mayakovsky could not resist writing a pier if you want “Misha”, then put a certain amount of money on a savings book. That’s how “Bear-to-bearded” became “Three Bears”, candy – one of the signs of the USSR, and I. Shishkin – a national artist.

True, he was a singer of the nature of his native land and before the “Bears”. The artist wanted and was able to surprise, first of all, with landscapes, which he wrote out so jewelry that he deserved the glory of the master of detail. Only he will see a haze of mist, as if hovering among the branches of century-old pine trees, soft and cozy moss on boulders, clear brook water, morning or evening coolness, midday heat of summer. Interestingly, all the paintings of the artist are partly epic, but monumental – always. At the same time, Shishkin is not pompous, he is just the person who genuinely admires the majestic nature of his native land and is able to portray it.

“Morning in the Pine Forest” pacifies the balance of his composition. Three cubs are very harmonious with their mother-bear, and to the two halves of the fallen pine, you want to apply the divine proportion. This picture – like a random shot on an old camera, which managed to make a tourist, so long looked for a true virgin nature.

And if you look at the color of the picture, then the artist seems to be trying to cover all the richness of the colors of the dawn. We see air, but it’s not a blue accustomed shade, but rather a blue-green, a bit cloudy and hazy. The predominant colors that surrounded the clumsy inhabitants of the forest are green, blue and sunny-yellow, reflecting the mood of the awakened nature. Bright glows of golden rays in the background seem to hint at the sun, which is about to light up the earth. It is these glare and give the picture of solemnity, it is they who speak about the realism of the fog over the earth. “Morning in the Pine Forest” is another confirmation of the tactileness of Shishkin’s canvases, as cool air can even be felt.

Look carefully at the forest. Its appearance is conveyed so realistically that it becomes clear that this is not a forest glade, but a deaf thicket is the true concentration of living nature. Above her, the sun had just risen, the rays of which had already made their way to the top of the tree crowns, splashed with gold and again hid in the thicket. The moist, not yet dispersed fog seems to have woken the inhabitants of the ancient forest.

Now the cubs and the bear woke up, having developed their stormy activity. Satisfied and well-fed bears from the very morning learn about the surrounding world, exploring the nearest fallen pine, and the mother-bear watching the kids, who clumsily clamber to the tree. Moreover, the bear observes not only the cubs, but also tries to catch the slightest sounds that can disturb their idyll. It’s just amazing how these animals, written by another artist, were able to revive the compositional solution of the picture: the fallen pine was as if created for this bear family, busy with its important affairs against the backdrop of the remote and wild corner of Russian nature.

The painting “Morning in the Pine Forest” reveals the skill of a realistic image and its quality, and in many respects outrunning modern digital technology. Every blade of grass, every ray of the sun, every needle of a pine is written by Shishkin lovingly and reverently. If the foreground of the canvas depicts a fallen pine tree with bears climbing on it, then in the background an ancient forest is located. Bear cubs and the rest of nature cause each person to pacify positive emotions. Beasts, like toy, fill with kindness the beginning of a new day and tune in to positive thinking. Looking at these cute animals, it’s hard to believe that they are predators by nature and can not be capable of cruelty. But the main thing is not even that. Shishkin accentuates the viewer’s attention to the harmony of sunlight, which comes from the background of the picture with the cubs in the foreground. Draw a visual line through them – and you will certainly notice that these are the brightest objects in the picture, and everything else, including the irregular shape of the pine, is only complementary strokes.

It seems that “Morning in the Pine Forest” depicts real, living bears on some fantastic landscape. Vyatka forest, from which nature is written off, say the researchers, is very different from Shishkin. Just wondering whether there are now bears, because the picture for a century, educating the aesthetic and moral taste of people, and asks to take care of the surrounding nature.