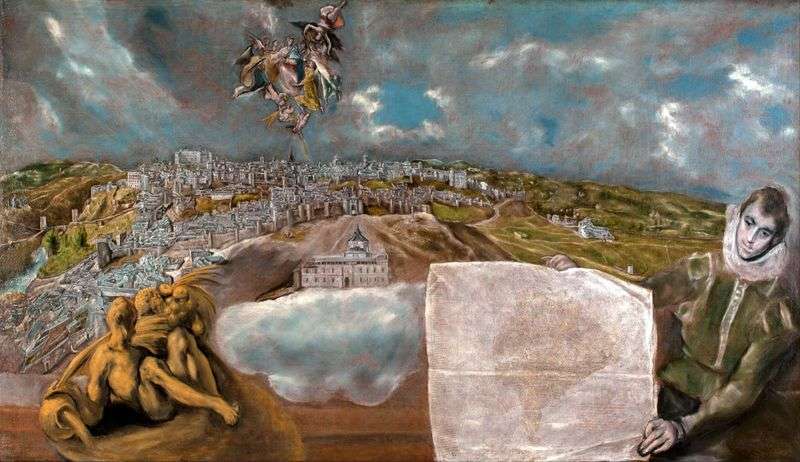 Of special note is the landscape from the El Greco House Museum “View and plan of Toledo”, the last significant work of the master. Panoramic image of the city, widely and smoothly stretched on a gentle hill, is written “smoke” in a very light tonality of bluish, gray, pink-lilac, olive-green colors.

Smears are laid so lightly that the threads of the canvas shine through. This Toledo, pacified, shrouded in silvery clear light, we do not know in the work of El Greco. In his receptions appeared some kind of naivety, as if the artist wants to return to something lost in his soul, in his perception of life.

Wishing to please the customer – the hospital San Juan de Afoer, – he writes this building in the foreground in the form of a layout, and with the most favorable side, frees him from the surrounding buildings, placing against a background of a rusty lilac slope.

The artist, who during this period destroys any norms in art, is afraid of being misunderstood not only by the customer, but also by the viewer, for in the lengthy inscription executed on the plan by Jorge Manuel, he explains why the hospital is presented in the form of a layout, and that placing in the sky the group “Vestments of Our Lady of St. Idelfonse” – he cared more about the decorative impression rather than about the image of the figures themselves. The plan, which the young man shows on the right, is needed in order to determine the attitude of the hospital to other buildings of the city, which is again mentioned in the inscription.

The city in which, it seems, all the houses, all the known monuments, are represented, as it were, a fragile precious product piled together. With special care Toledo features are transferred – the quarters and towers of the walls surrounding it, the Bisagra Nueva gates, the Alcantara bridge, the cathedral and the huge block of the Alcazar at the highest point are clearly visible. The relief of the terrain, steeply descending to the Tagus and more gentle to the northeast, from where El Greco almost as a rule depicted Toledo, is also reliably recorded. Such an abundance of details and such verbosity seem unexpected. Moreover, in the same period, the master creates a landscape called “View of Toledo”, often known as “Toledo in a Thunderstorm” – an image of philosophical generalization and an exciting tragic force.

“View and plan of Toledo” contains many interesting finds. The picture is very complex in its own way. External signs of plausibility do not exclude a strong imprint of the surreal. Pale youth, written in the foreground, written blurryly, in dull greenish tones, is as conditional as the foggy-golden allegorical figure with the overturned vessel on the left, symbolizing the Tagus River, the reminiscence of the ancient river god. Nature and the city are deprived of the sense of a stable support, the earth’s firmament.