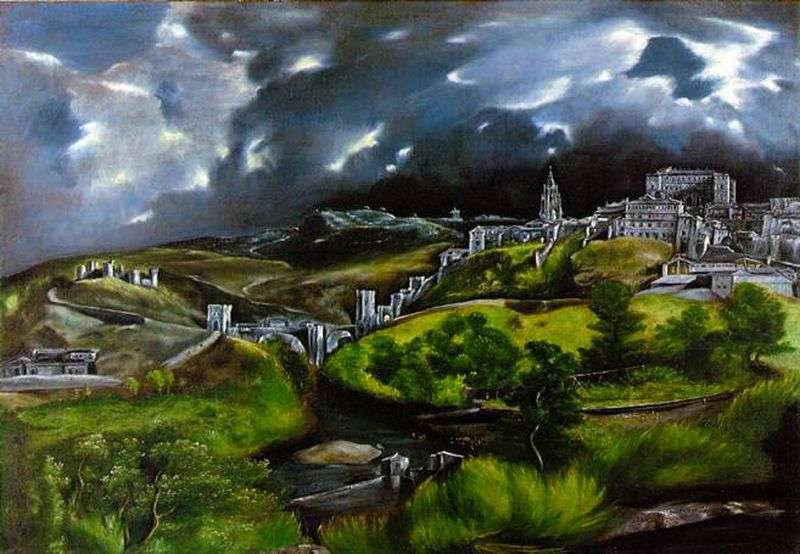 Under gloomy stormy sky on a hill covered with meadows and forests, depicted the Spanish city of Toledo, shown from the north. In the foreground is seen Alcantara bridge across the River Tajo. Above the town rises the Royal Palace Alcazar , and Toledo Cathedral.

On the left bank – the castle of San Servando. Emphasis is the contrast between the sky and the earth’s firmament. City views given below that allowed the author to raise high the horizon and enhance stretching ratio. We used a phantasmagoric light.

Comparison of contemporary photography with a picture allows you to observe the spatial curvature of the artist made – in particular, the reality is not visible high bell tower of the Cathedral of Toledo. But El Greco pushed her out of the Alcázar and wrote as if looking at it on the east side of the city. While on the left side shows a plausible Castle of San Servando, but the building is written below it on the slope – fiction artist.

“View of Toledo” refers to the late period of the artist. The picture painted in the Mannerist, Baroque, or even have a manner different from the free circulation of nature – location of some buildings on the canvas is different from their location in reality.

Menacing stormy sky is typical of the art of El Greco. Stormy skies found on many images of saints, painted by the artist. “View of Toledo” is the only remaining “pure” landscapes of El Greco.

“View and Plan of Toledo”: a young man in the right corner holds the parchment with a drawing of the city, where El Greco’s hand written explanation of why the picture he put some of the buildings are not where they are in reality

The second landscape “View and Plan of Toledo” was intended to be a document of the city using the mapping language, while the first creates an image of the city by chosen selection of his most characteristic traits. This painting belongs to the tradition of emblematic species of the cities, whose task it was an interpretation and not documented, and who sought to capture the essence of the city, rather than its exact features.

“On the right shows a young man with a detailed plan of the city in their hands at the same level, Greco instructed his son to write the very words that we are interested in.:

“… I was forced to portray the hospital of Don Juan de Tavera small, as a model; otherwise he would not only shut the city gates themselves de Vizagra, but it would be a dome towering above the city. Therefore, he was stationed here as a model, and flipped on the spot, because I prefer to show better the main facade, rather than the other – however, out of the plan shows how the hospital is located in relation to the city. “