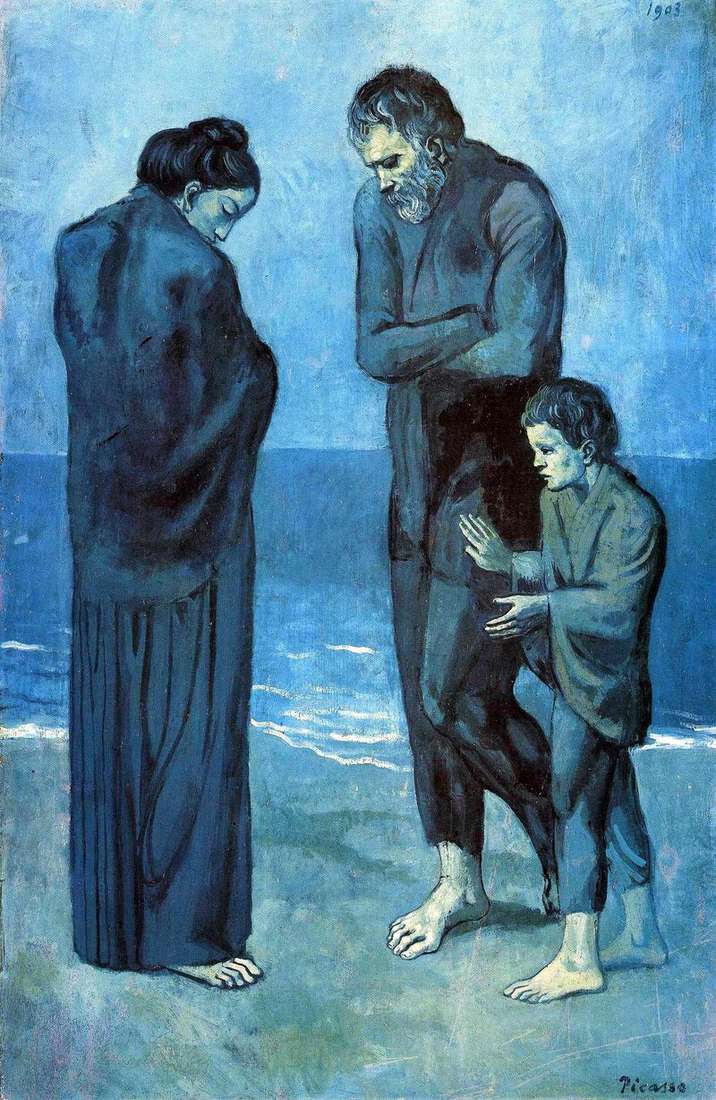 The painting “Tragedy” refers to a pleiad of the most famous works of Picasso. Work is one of the best achievements of the blue period.

The depressive period of creativity in which tragedy reigned, drama, grief “spawned” many outstanding works of art of the great master.

Today it is known for certain that the reason for such a dark period of creativity was the death of a close friend of Picasso and the difficult material and moral position of the artist. But ironically, the very pictures that were created in an atmosphere of extreme poverty, today do not get tired to beat price

records at all sorts of prestigious auctions. “Tragedy” – one of such significant works.

The plot of the picture was born as a result of close observation by the artist of the same unsettled and unhappy people like himself. The work depicts three poor people who stand on the seashore. Mournful faces, lowered shoulders, folded hands – all this expresses sad thoughts.

All heroes are barefoot and poorly dressed. They seem to be wrapping up their poor rags, trying to hide from the piercing sea wind.

The feeling of tragedy is even more aggravated when you look at the boy’s face – his appearance is deprived of the immediate vitality inherent in every child, on the contrary, it is not childishly serious and sad.

The author does not give us clues as to who these people are: the family of fishermen, or simply passers-by, whose legs led them to the sea coast.

All the work is imbued with some kind of hopelessness and fatality of what is happening, which inadvertently raises the question, what strong emotions were overwhelmed by a 20-year-old young man, who then was Pablo Picasso, since they could “pour out” into such tragic and hopeless pictures?!

Today, this emotional work can be seen in Washington, at the National Gallery of Art.