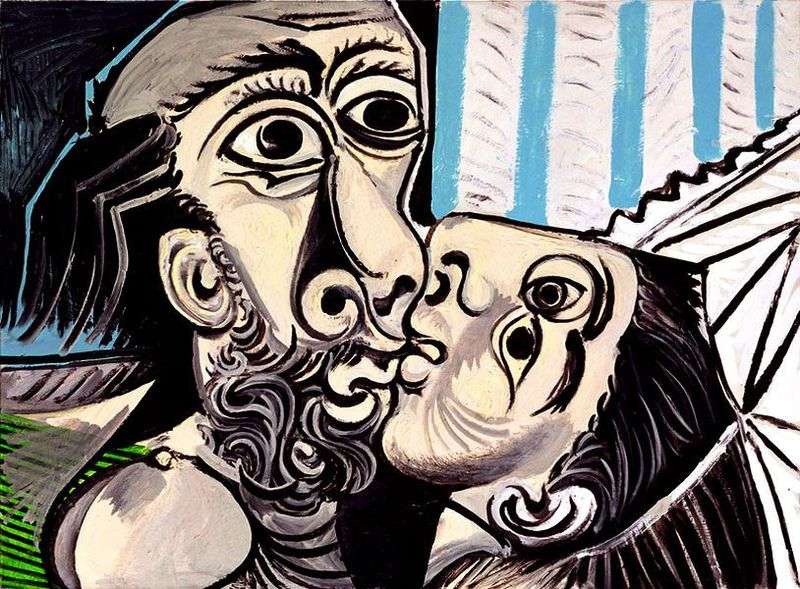 The picture “Kiss” is rightfully attributed to one of the best works of the late period of Picasso.

Hyperbolic faces merged in a kiss… Everything here is exaggerated – eyes, noses, ears, curls of a beard. In his unusual manner, far from realism, the master could in some incomprehensible way convey the intensity of passions and the different emotions of two people kissing.

The woman on the canvas is sensual, loving and passionate. With unlimited devotion and trust, she clings to her beloved man. Her eyes are reduced to the bridge of her nose – it takes so much effort to look at her favorite features.

A man shows quite different emotions. He looks detached and frozen. His huge eyes are directed away, and do not look for the devoted eyes of a woman at all.

The amazing phenomenon of the picture is that the people depicted, caught in such an intimate moment as a kiss should be very close, however, the picture clearly demonstrates an insurmountable emotional distance between them.

The technique used by the artist in this work is far from uniform. Whether Picasso deliberately used various methods, or such stylistic versatility is due to the weak eyesight of the master, forcing him to constantly make adjustments. Some brushstrokes on the canvas differ in accuracy and accuracy, while others, on the contrary, are characterized by haste and “ease.”

The coloring on which the artist stopped is also not typical of the late Picasso. These are blue, blue and gray tones. As if at the end of his life, the master once again remembered the melancholic and dreary blue period of his creative work at the beginning of the artistic path of a long life.

The picture with all its avant-garde – broken faces, improbable proportions, deformed lines, extremely emotional. It is not alien to her incriminating, but without aggression, which can be caught in the earlier works of Picasso.

Now the picture is in Paris, in the Pablo Picasso Museum, and it invariably attracts attention with its unusual presentation of space, figures and the demonstration of human passions and emotions. This inexhaustible interest, which has lived for many years, is an obvious confirmation of the originality of the great master of fine arts, Pablo Picasso.