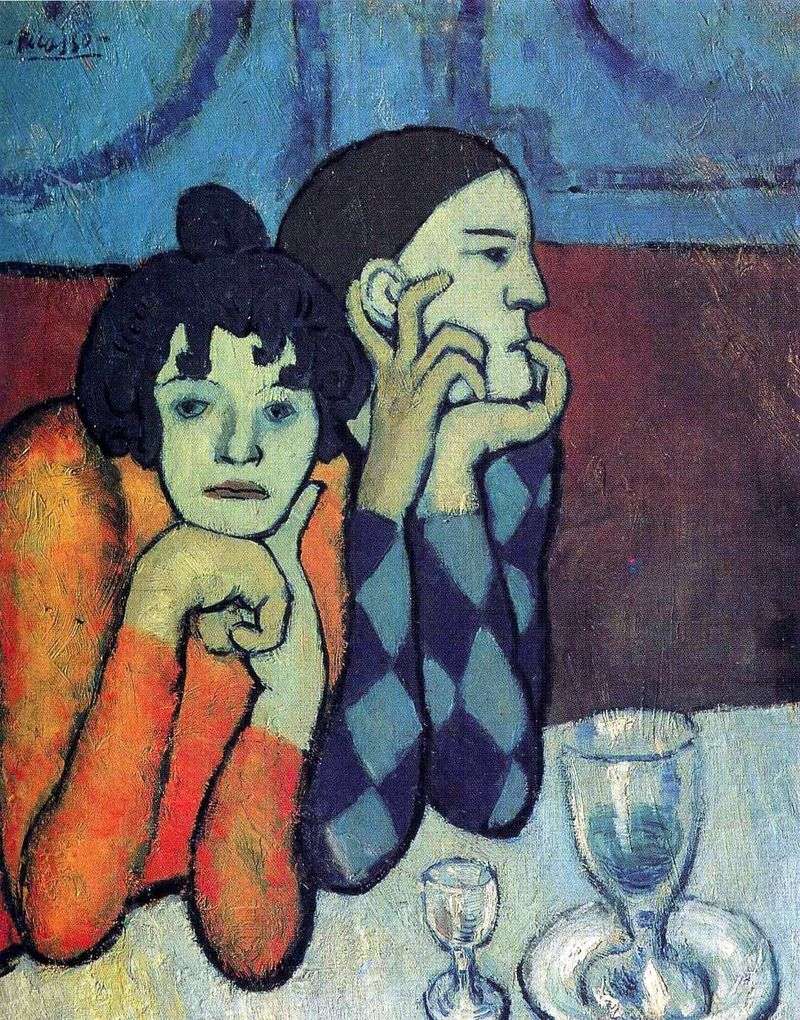 The picture was painted by Pablo Picasso at the very beginning of his “blue period”. She combined the two favorite themes of artists of those times – scenes in cafes and circus performers.

This work is interesting because here the future internationally recognized artist is still at the beginning of his career. Based in Paris, young Picasso is in search of his style, and soon finds it. “Harlequin and his girlfriend” vividly demonstrate the beginning of the “blue period” – although there is still a little blue here and there are no those nagging stories, the way and manner of writing is clearly outlined.

Harlequins and other circus artists seduced the artists with their free life and trampling on many foundations, but from Picasso we see the other side of these heroes – the one that is beyond the ideas and audience applause.

The mood of the picture is depressive – the two heroes leaned over the glasses, and, supporting the chins with their hands, they looked around with unseeing eyes. Although they sit close, closely hugging each other, there is a gap between them and aloofness. Picasso makes it clear that there is a close connection between these people, but everyone suffers a heavy burden of lack of money and insecurity alone.

The pale light blue hue makes the faces of almost heroes bloodless, which contrasts particularly with their bright outfits. A special hopelessness is read in the eyes and face of the girlfriend of Harlequin – a tired look and lips stretched into a string indicate fatigue and sadness.

Experiencing acute need, Picasso really wanted to sell this picture, but the work of an unknown 20-year-old Spanish artist did not attract buyers, although his style was very unusual and original. A few years later, when the master had already gained popularity, this canvas was acquired by the Russian collector Morozov and brought to Russia to replenish his rich private collection. In 1919, the collection of Morozov was nationalized and the original Picasso can now be seen in the Museum. A. S. Pushkin.