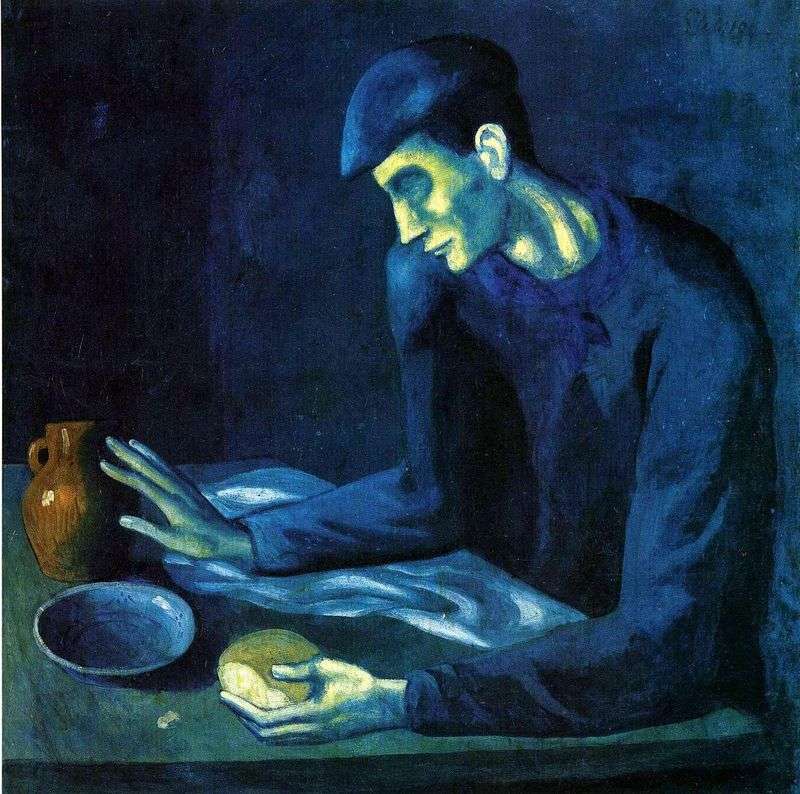 It is very difficult to say what caused the “blue period” of the great master’s creativity. A young boy, a little over 20, Pablo Picasso was immersed in the dramatic, tragic thoughts that he, with his characteristic expression, expressed on canvas.

Some researchers believe that the cause of such a decadent mood is the suicide of the best friend of Carlos Casagemos, the beginning artist. Together with him, Picasso dreamed of conquering and shaking the entire artistic world, drawing a happy future. Glory recognition was destined to gain only Picasso. This loss had a tremendous impact on Picasso and plunged him into a prolonged depression, from which only a new amorous passion years later would bring him.

All the works of this period are united not only by the unity of gloomy moods and screaming images, but also by the color palette and technique. The works are dominated by blue, blue, black, gray tones, and the manner is close to realism, as never before in the work of Picasso.

“Breakfast of the blind” at first glance is striking in its despair. The hero of the picture is a blind youth surrounded by small, poor objects, which further emphasize the tragedy of his position.

The main accents of the canvas are focused on the eyes and hands of the hero. The author did not draw the young man’s unseeing eyes – these are only darkened depressions, which brightly and succinctly demonstrate the darkness in which the young man is forever immersed. Further, the view is translated into thin and long fingers. In one hand, the blind man holds a small slice of bread, while the second one tries to touch the earthenware jug by touch.

The poor table, on which there is nothing but an empty plate and a jug, responds in the hearts of the spectators with nagging depression. Helplessness, poverty, despondency, and most importantly doomed loneliness are the main leitmotifs of the picture.

The blue palette creates a certain detached mood and further emphasizes the pallor of the face of the hero.

There are those art historians and researchers who see this young man as the artist himself. It should be remembered that at the time of writing Picasso was only 22 years old. He lived then in Barcelona and was in extreme need. Perhaps, through the blind glance of a young man, the future world-renowned master sought to show his experiences and the tragic thoughts that kills young Picasso in those difficult years.