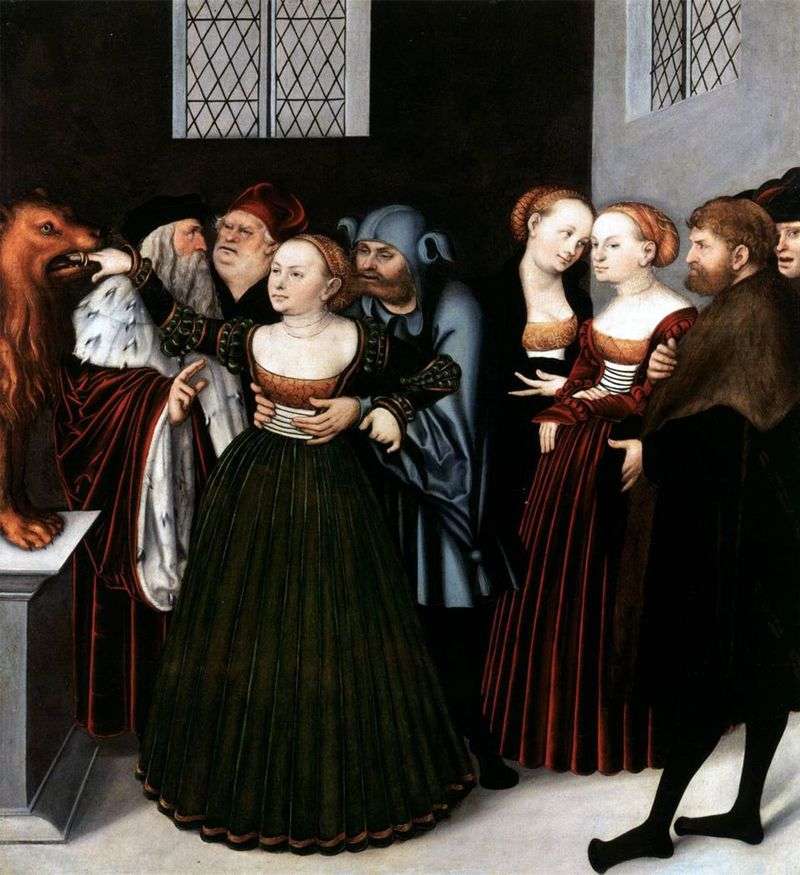 The painting “The Mouth of Truth” demonstrates one of the most popular legends, which in ancient times originated in Italy. During this period, European paintings were very popular paintings on the themes of ancient legends, different stories and beliefs. The legends in each country were overgrown with details or details.

First of all, we need to understand what the “Mouth of Truth” is. This antique round marble slab is 1.75 m in diameter with the image of the Triton mask, dating from the 1st century AD. e. During the Roman Empire, it covered one of the hatches of the Great Cloaca in Rome.

During the early Middle Ages, the mask was erected vertically on the portico of the Church of Santa Maria in Cosmedin in Rome. And already then in the eternal city the legend spread that if a liar puts his hand in her slightly open mouth, the deity will bite her.

Perhaps a harsh and unusual kind of mask gave birth to this belief. It is likely that the legend is due to the fact that in ancient times near the temple was a trading area, where there were many thieves and public executions were organized here.

The famous film “Roman holidays” with Audrey Hepburn and Gregory Peck in the lead roles brought the mask incredible popularity. Remember, the main character reporter Joe Bradley put his hand in the “Mouth of Truth” and pretended that he could not pull it out, and the young princess Anna was frightened.

Lovely Hollywood rally, however thousands of tourists began to be photographed here. And today, near the mask, there are large queues of tourists wishing to capture themselves in this “historic place”.

It is interesting that the mask of the “Mouth of Truth” was popular in Rome for many centuries before the invention of cinematography. The historians have already mentioned the “Tears of Truth” already in the first guide to Rome for pilgrims Mirabilia Urbis Romae. In it, visitors reported on the magical abilities of Ust and warned that Every liar and adulterer risks losing his hand here. Over time, husbands began to come here, suspecting a spouse of infidelity.

At the heart of the painting “The Mouth of Truth” by Lucas Cranach is a moralistic plot. Tradition says: one important dignitary was informed that his wife was cheating on him with a young lover. So he brought his wife to the square where a sculpture of a lion with an open mouth was installed. Here it symbolizes the “mouth of truth” – a kind of “lie detector”.

In the crowd somewhere there is also her lover, whom the unfaithful wife has persuaded to pretend to be a fool. At the most crucial moment, he stood beside the woman and hugged her mischievously. When a woman was asked: “Did she change her husband?”, She could swear that no one, except her husband and that fool, had ever touched her.

The picture shows a judge in an ermine robe, next to him a simple-minded husband who turned in the direction of the mouth and carefully follows the “mouths of truth,” the young lover is depicted in a suit of greenish-blue tones and in a stupid hood on his head.

So the unfaithful wife held a simple husband, she told the truth, the hand was unscathed, and the husband was deceived. The vice exists and it’s sad. The artist – a man of strict rules, supported the Reformation – reminds his contemporaries of morality and family virtues.