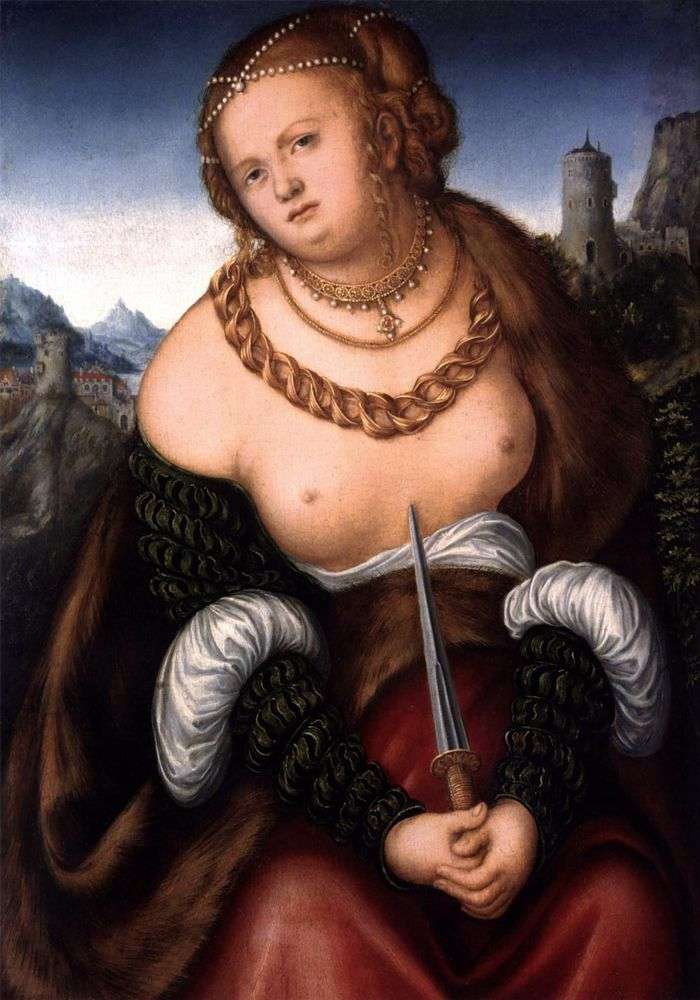 Lucas Cranach the Elder created many paintings on antique subjects. These cabinet pictures were intended for the Kunstkammer, grandees or patricians and corresponded to the tastes of the German aristocracy. From the workshop of Cranach came a large number of different Venus, Apollo, Paris, nymphs and graces. Only Lucretius was more than thirty.

Lucretia – the legendary ancient Roman virtuous wife of the Roman patrician Tarquinia Collatin and daughter of the consul – was an extraordinary beauty, but her family honor was more precious than life.

It happened in the V century BC. e. The son of the Roman king Tarquinius the Proud was captivated by the beauty of Lucrezia and, threatening her with weapons, raped. Lucretia told all about her husband, and to prevent this dishonor for her husband and family, she stabbed herself in front of him. This event served as the beginning of the rebellion raised by Lucius Junius Brutus, led to the overthrow of the royal power in Rome and the establishment of the republic. That is why throughout the centuries of Roman history Lucretia was very revered.

In the picture, Lucretia is depicted at the time of suicide. Her figure is naked for three quarters: a lovely breast, sparkling precious stones, drapery of rich clothes – everything conveys beauty and luxury. Hands tighten the dagger, the sight of beautiful eyes is sad… The artist displayed not death, but the most dramatic moment – the dagger now sticks into this beautiful body. And nothing can be prevented and changed…