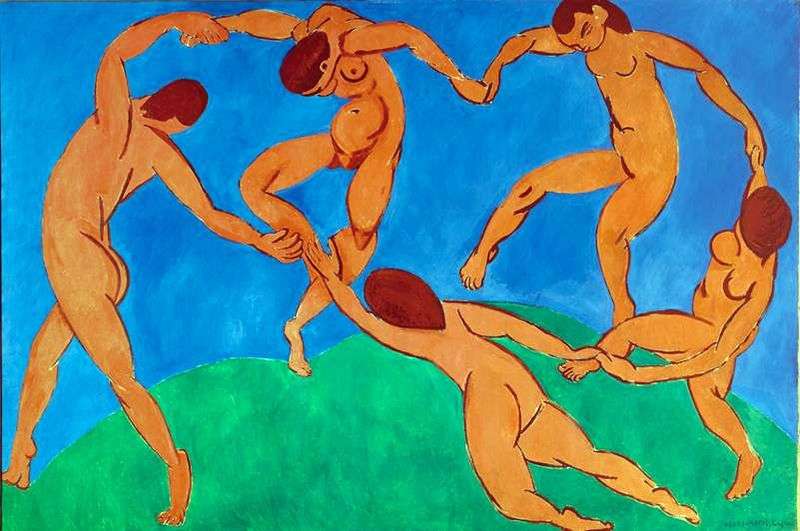 Creativity Matisse – a significant phenomenon of the French art of the early twentieth century. His style is different from the usual classical compositions. Contemporaries were shocked novelty, a riot of colors, the power of emotion that caused his paintings that the artist called “wild”. With a light hand, the term was fixed for an artistic course “Fauvism”, which is based on Matisse and his associates.

The reality is seen through a kaleidoscope of Matisse – colorful, lively, fun, with a kind of defiance. The colors of the paintings are bright, flashy, simple forms, but to fully convey the plastic movements.

The painting “The Dance” and “Music” were written on commission from the Russian collector Shchukin. It was a sensation!

The painting “The Dance”, we see five female figures, dancing in the dance. No background, no superfluous details, only the process. Sounds of music fully seize the bodies of the dancers, their grace, bending bodies clearly show the trend.

The painting, like a living, looking at her, we feel like vibration and are ready to join the dancing. Not by chance, the idea of a round dance was so successful that it was repeated several times by the artist, and also picked up and interpreted sculptures and choreographer.

Reality is represented by Matisse in his own way, his dancers do not have ideal forms, they seem from another dimension, but at the same time attractive and beautiful. The latter almost became a reason for refusing to take an order collector, but prudence took up over stereotypes. Women’s bodies are not exactly proportional, hairstyles are simple, the person is not traced, only strokes convey emotional ecstasy.

However noble dance, female dance fascinates naturalness, ease – is a colorful world, living by the laws of rhythm. Picture of large-scale, its length is 4 meters , so looking at her, felt the power, integrity. Painting “Dance” – is author’s desire to capture a moment of life, which could perfectly.