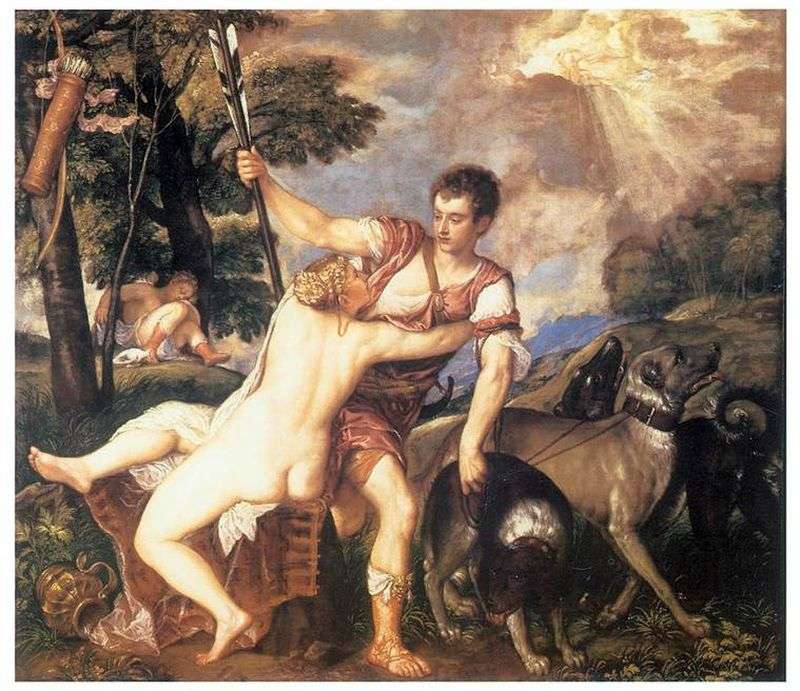 Story for the painting ordered by the Spanish King Philip II, Titian chose the tragic story of the love of Venus and Adonis. He finished the painting in 1554 g. , When his patron was in London on the occasion of his wedding to Mary I Tudor, Queen of England.

The picture is not quite in harmony with the wedding celebration, but it is consistent with partiality of the king to the naked female body. Earlier Titian Philip sent a picture of naked frontal Danae. In a letter to the king, he explained that the two paintings hanging side by side, he will be able to enjoy the beauty of the female body in different ways.

this poem: the plot is taken from mythology, but poetically treated. He portrayed a nude Venus, clutching the young hunter, who pays no attention to her pleas and ready to go at dawn to hunt. Cupid asleep under a tree, while a sun comes the fateful day.

Adonis. When Myrtle tricked his father to join the incest, the gods turned her into a tree to protect him from the wrath. As time passed, the tree trunk was split and Adonis was born. Struck by the arrow of Cupid, Venus madly in love with a beautiful young man.

She knew the prophecy that the Adonis is killed while hunting, and tried to prevent this misfortune, but Adonis was adamant in its intention to go on a hunt, where he killed the boar. After the death of Adonis on the site of his blood dripping rose roses and tears of Venus – anemones.