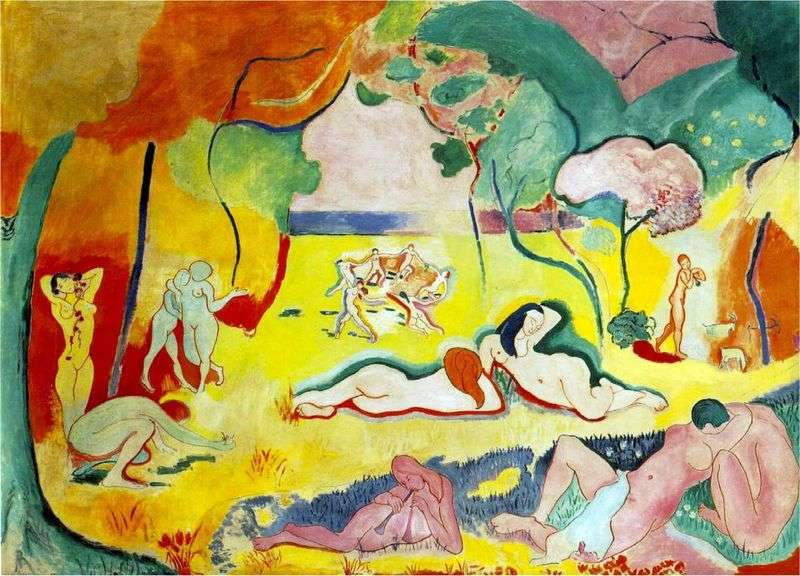 The painting “Joy of Life” is in the private collection of Barnes, the rules of which prohibited reproduction in color until 1992. Now that this ban has been lifted, the picture seems to be rediscovered and subjects the audience’s reaction to verification.

For example, contemporary critic Peter Campbell confesses: “Looking at this picture, it’s hard not to be dismayed, not to share the feelings of those who saw it during the first public demonstration.” What happened then? Matisse’s biographer, Spelling cites the words of Janet Flanner, an exhibition visitor: “Parisians, still remembering what was happening, can tell you how, just entering the salon, they heard some exclamations and, heading towards the source of the noise, found themselves in a crowd, mockingly giggling, snorting, giggling, trampled near the inspired image of joy created by the artist “…

Groups of pale naked figures – pink, purple, yellow, two blue – scattered across a forest glade. Almost all of these figures were given classical poses, which can remind – and not without reason – the painting of Titian or Ingres. We see two shepherds playing on the pipe, and in the distance – the dance of dancers. The general background of the scene is yellow, the grass in some places is purple, in some places it is green.

The figures stand out against a bright background – two women in the center of the canvas are surrounded by something like a halo, orange at the bottom and green at the top. The trees – orange, green, pink, yellow – are somewhat similar to those that can be seen in Gauguin’s Tahitian landscapes… This is the first picture where Matisse follows his own laws from beginning to end. He begins to consistently introduce his “screaming” colors, “wrong drawing”.

Matisse called this picture “my Arkady” and admitted that he wanted to “replace the vibrato with a more sensitive, more immediate harmony that would be simple enough and sincere to provide a calm surface.” And he succeeded: the researchers call “The Joy of Life” for good reason “a breakthrough into the realm of luxury, peace and pleasure.”