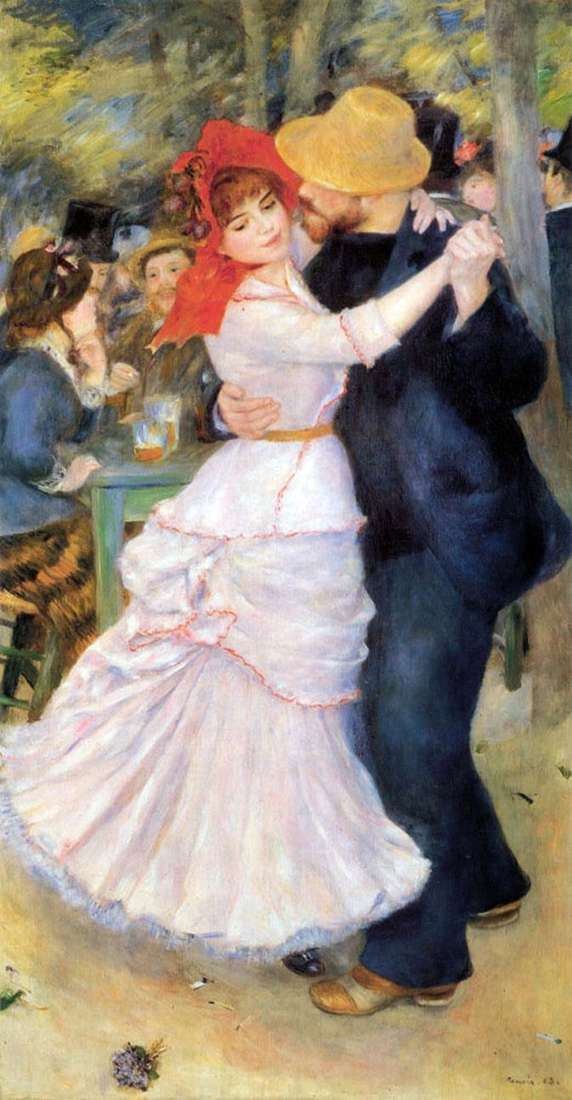 With some doubt, they can also be called portraits, although specific and famous people posed for Renoir. In any case, the female image in two of these three paintings represents the model Marie-Clementine Valadon, who later became a famous artist under the name of Suzanne Valadon, and her son Maurice Utrillo became a world-famous artist. And the third picture shows Alina Sherigo. Dancing couples are represented by Renoir not on the stage, but in household interiors.

From this point of view, they can not be called theatrical, and yet, trusting the feelings of Renoir, who presented life as a magical theater, the viewer perceives these three paintings as a shining theatrical celebration. The composition of dancing couples on each canvas returns us to one of the early portraits of Renoir in 1868: “A portrait of Sisley with his wife.” This two-figured composition unfolded in a new way in a dance couple presented in three paintings. The plot, familiar to us from the picture “Ball in Moulin de la Galette”, as if approached the audience and personified. In the big picture of the ball there are a lot of pairs, and here on each canvas there is only one, presented in all details.

The partner and the partner turn in a captivity of a dancing rhythm, but we see only a moment, although if you mentally imagine these three works side by side, you will get almost a complete revolution of the movement of dancing couples. Among these three works stands out “Dance in Bougival”. And the idea of this picture owned by Renoir for a long time. In the collection of graphics of the Vienna Albertina Museum there is a drawing marked in 1880, almost exactly depicting the composition of the painting and first of all the drawing of a dancing couple. And although, when you see the canvas itself, it seems as if everything was written instantly, as if in one sitting, but this impression itself is the result of the painter’s long work, which he aspired to and which he managed to achieve.

The composition of the picture consists of two plans with small household details, such as a small bouquet of flowers and several trampled cigarette butts thrown on the ground in the first plan. The center and the whole main part of the canvas is occupied by two figures of dancers, and the background, as if a theatrical backdrop, is a summer cafe laden with simple painted tables and chairs, filled with a noisy crowd sitting around a glass of beer or crowding among trees and lush green people. It is easy and free for translucent paints to lie on a canvas, so that even a tree trunk seems to be somehow disembodied, because it is written in almost light gray, lilac, green and ocher tones.

The figures themselves are written in thick layers of colors, and we can see which way Renoir went, overcoming the now seemingly unsteady and not very convincing manner of impressionistic writing. Only the bright color of the red hat of the girl and the yellow hat of the man, especially the canary-colored colors with lilac and violet strokes on the men’s hat, as well as the background and thick crown of the trees, are written in a classic impressionistic manner. The colors of the dress of the girl and the suit of the man are chosen in a proper, perhaps only Renoir, combination and they look both contrasting and as if complementing and combining with each other. These colors, which form the basis of the color of the whole picture, tightly depict the figures of the dancers and emphasize their elastic movement.

The man is dressed in everything dark, his pants, jacket and simple blouse are painted in thick blue colors that take on deep velvety shades in the frame of canary-colored flowers that color his headdress and coarse shoes. The girl has a light lilac, almost white dress, just this delicate lilac tint barely perceptible to the dark colors of her partner’s suit. A nearly straight vertical line marks the border of the combination of their outfits, and around this imaginary axis there is a curvy hem of a woman’s dress and a tattered floor of a men’s jacket. Marie-Clementine Valadon, who posed for the artist in the image of a dancing girl, and two years later, in 1885, served as a model for the portrait of Renoir “Scythe”, now kept in a private collection in Switzerland, had a rather typical fate for a woman in Montmartre, which brought her to the rank of famous French artists. The daughter of a seamstress and an unknown father, she appeared in Paris, when she was not even five years old, it was difficult and poor to live with her mother, who earned apartment cleaning.

After studying a little in a religious school, she then worked in a sewing workshop, was a nurse, a shopkeeper, and a vegetable vendor. Having fallen in love with the circus, at the age of fifteen she became an acrobat in the Mollier circus. Once, performing a number, she fell off a trapeze and fell into the arena. I had to say goodbye to the circus forever. Since childhood, she painted and dreamed of getting into the environment of artists. Helping her mother to distribute laundry from customers to customers, she met one of them, Puvis de Chavanne, and became a model. Judging by the portraits of Renoir, especially in the picture “Braids”, Marie-Clementine Valadon was a very beautiful girl with beautiful thick hair and a slender figure, and her amazing, despite the fact that she was a model and model, perseverance and hard work transformed her penchant for drawing in genuine artistic talent.

Suzanne Valadon became a famous artist, and who knows, maybe Renoir’s enthusiastic look, who presented her as a charming and charming girl in her paintings, strengthened her spirit and faith in herself, in her strength, in her vocation. “